In the scorching heat of early June – one of the hottest months in a year, my driver, Suresh, skillfully drives the old non-airconditioned minivan through every turn and crossroads of Sri Lanka’s intercity highway. He has been doing his job for more than ten years now, hence the unrivaled knowledge of Sri Lanka’s interesting places. This time he is taking me to Anuradhapura, the country’s oldest continuously inhabited city – since 10th century BC – and the most prominent site for Sri Lankan Buddhist pilgrimage. We are just two days away from an important national holiday celebrating the arrival of Buddhism to the country. Signs of preparations for the special day are evident. Countless flags of Theravada Buddhism – stripes of red, yellow, blue and white – are hoisted everywhere. Upon approaching Anuradhapura the smooth asphalt road turns into dirt and gravel, under renovation and scheduled to be completed before the holiday.

Arriving at Anuradhapura, a gargantuan bell-shaped red-brick dagoba (Buddhist stupa) welcomes me. It is Jetavana Stupa, a part of Jetavanarama monastery which was built in the 3rd century AD. Purportedly the tallest brick structure in the world during its heyday, Jetavana stupa still retains its grandeur despite the crumbling exterior, revealing thousands of weathered bricks prone to further erosion by the elements. It is in utter silence where I am one of the only few visitors. Respecting the tradition, I take off my shoes upon entering the stupa’s mid-level where pilgrims circle the perimeter of the giant structure. Rather plain in decoration, Jetavana stupa only contains a few carvings depicting Boddhisatvas and elephants. 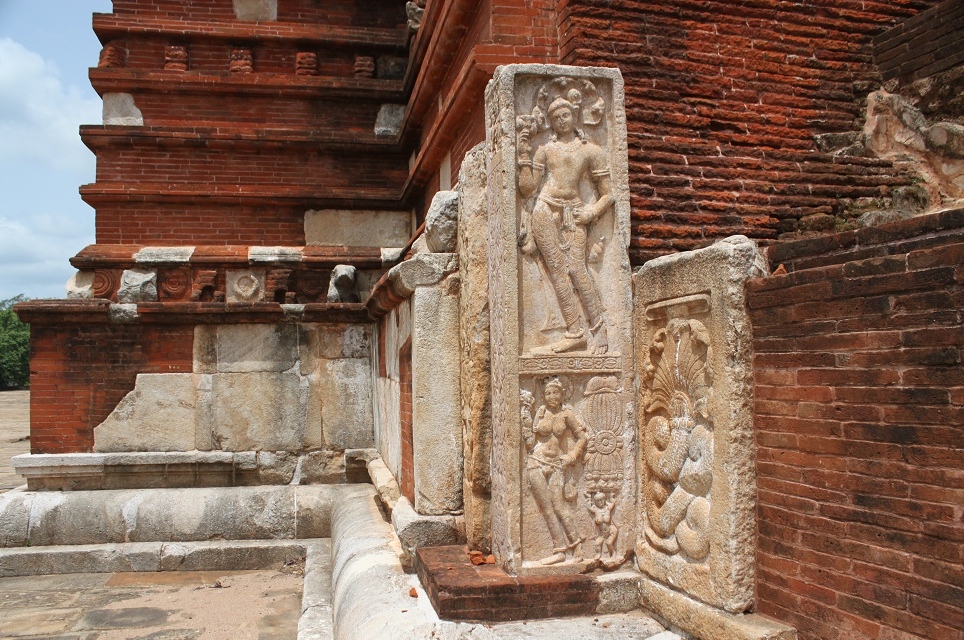 Anuradhapura was once the capital of Sri Lanka from the 4th century BC to the 11th century AD. Among other ancient cities in the Cultural Triangle, it is arguably the most important one – hosting some of the country’s most venerated Buddhist sites.

With some photographs in hand, I walk back to the car where Suresh waits for me patiently under a shady tree. “How many places are we going to visit?” I ask. He takes a moment before answering, “Eight places,” he replies. “Now we go to The Twin Ponds.”

Kuttam Pokuna or The Twin Ponds is one of the most visited ancient sites in Anuradhapura. Lacking the sheer splendor of other nearby sites, Kuttam Pokuna is in fact considered a significant technological achievement in ancient Sinhalese community. Slabs of cut granite and carvings of naga and other decorative elements on the steps are some architectural features of the ponds. 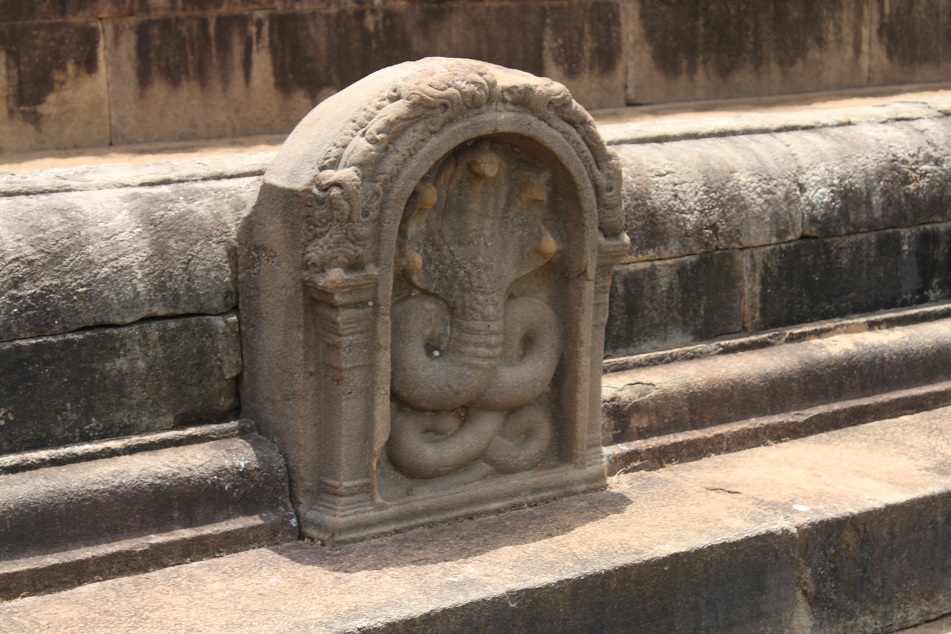 Not spending too much time at the ponds, we continue the trip to the next site. Suresh navigates his car through dirt roads and bushes, again showing his ample knowledge of this area. After passing through some trees with protruding branches which block my view, we arrive at Abhayagiri Monastery, another gigantic dagoba in Anuradhapura covered in wooden scaffoldings due to a renovation work. Unlike at Jetavana Stupa, I see more people in this place, some are pilgrims, the others are visitors like myself. Because of the apparent religious activity being conducted there, I decide not to wander around the stupa to respect the devotees and let them pray peacefully.

Suresh then takes me through winding roads to get to the next site. A few minutes later we stop near a closed road and he sighs. “Oh no, they are also doing renovation work here.”

In his effort to ease my slight disappointment, he takes me to Ruwanwelisaya, another giant dagoba in this arid plain. Different from the previous two dagobas, the flawlessly painted white dagoba of Ruwanwelisaya is filled with hundreds of pilgrims. Under the colorful Theravada Buddhism flags hung above the pathway by thin wires, I walk reluctantly toward the dagoba while always making sure I do not do anything that can disturb the pilgrims. However, it is a gray langur sitting on a pedestal near the entrance to the dagoba that steals my attention. Not long afterward, others come and join him watching passersby while at the same time hoping to get some food. Next to me a small group of Italians are also distracted by the langurs and spontaneously all of us take out our cameras at the same time. 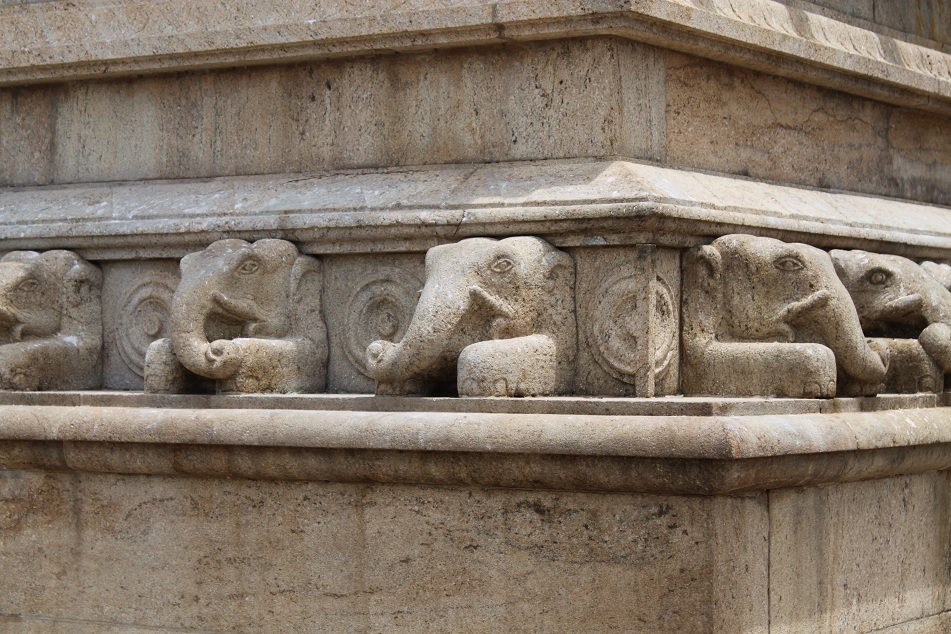 Murals of The Life of Buddha

Realizing that Suresh has been waiting for me in his car for several minutes on this very hot day, then I rush to Sri Maha Bodhiya, the last place I visit in Anuradhapura. It is a relatively short walk from Ruwanwelisaya and along the way more gray langurs are spotted with some water buffaloes roaming around them. Sri Maha Bodhiya is said to be the oldest surviving Bodhi tree – a sacred tree in Buddhism – in Sri Lanka, dating back from 288 BC.

Noticing some pilgrims are praying on the ground near the tree, I take no more step to get closer to it and choose to keep a courteous distance from them. Despite the crowd, the atmosphere at this place is unbelievably serene where everyone seems to be preoccupied with the prayers. 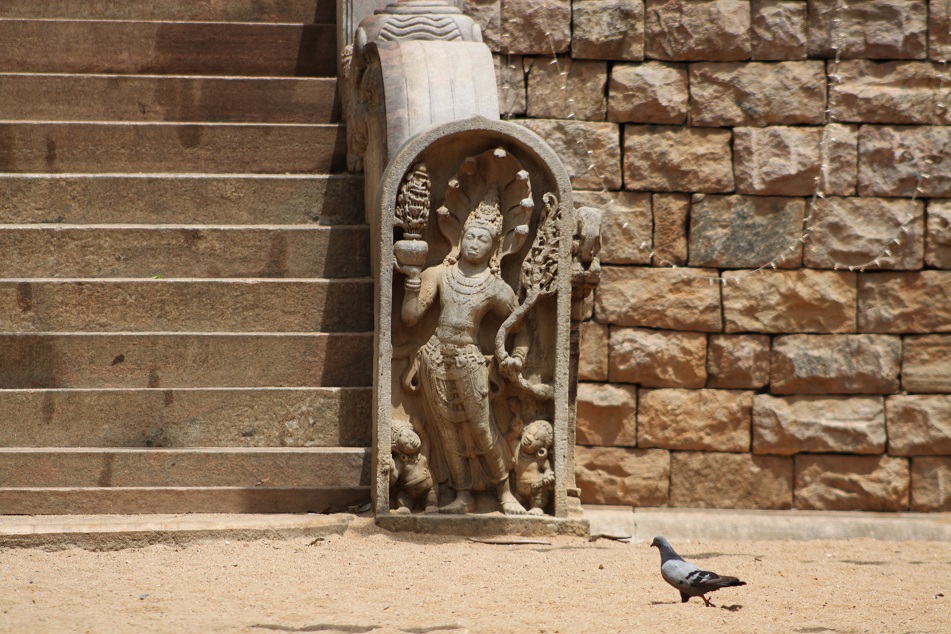 Going back to the car to see Suresh, I walk with an even higher excitement and anticipation for exploring more of Sri Lanka’s ancient sites. With the big national celebration approaching, I only have so limited time to explore the country’s Cultural Triangle without having to jostle with hundreds or even thousands of pilgrims.

36 thoughts on “Anuradhapura: Among The Giant Stupas”