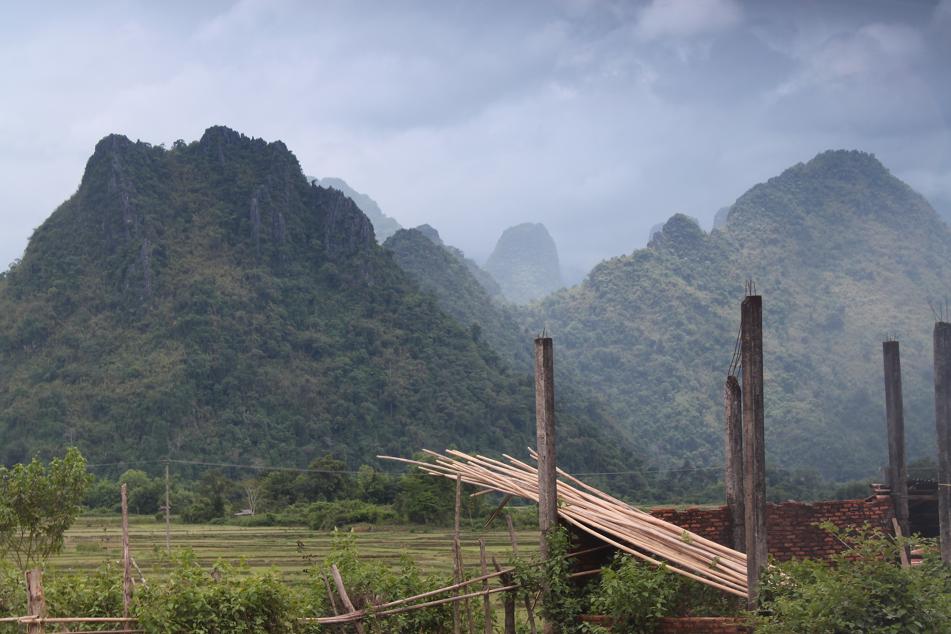 It was Sunday morning in Vientiane. After a two-day sojourn in the Lao capital, our affection for the city started to grow. But we knew it was time for us to continue our journey to the north, where the world-famous town of Luang Prabang is located. Around 7.30 am our driver picked us up at our hotel then made some gestures to show us where to sit in the minivan – right in the back seat. After settling the fare, off we went to Luang Prabang – sort of. When we made a reservation for the minivan a day earlier, the man from the transport company told us that the trip from Vientiane to Luang Prabang would take eight hours, and we believed him.

We were hoping that we could have the minivan to ourselves, but we were proven wrong from the very beginning when we met a young woman sitting in the front passenger’s seat, chatting very loudly with the driver. Not long after the minivan rolled onto Vientiane’s streets, the driver suddenly pulled over near a market on a street full of Chinese signage. Then he made some hand gestures to us again, trying to convey the message that he was going to have breakfast. Being in Laos, we knew that we could not rush into things.

After a few minutes, the driver came back to the minivan and we were good to go… but only for a couple of minutes when he pulled over again to drop off the woman. When she got off, I was so happy because we were practically the only passengers left, which meant that we did have the minivan to ourselves. However, my excitement ended soon afterward when our driver pulled over, again, to pick up more passengers. Some of them brought in loads of baggage which didn’t always smell nice.

Fast forward to an hour since the time we left the hotel, I started to get used to seeing our driving stopping the car, picking up some passengers, pulling over again to drop some others, and the circle went on and on until my focus was completely switched to something else – the road.

Compared to what I had experienced last summer when I crossed the Thai-Cambodian border to get to Siem Reap by shared taxi, the road from Vientiane to Luang Prabang was more… challenging, to put it in a positive way. Our car went through the constantly alternating tarmac and dirt road while the view from the window was rather dull. Flat plains – occasionally marked by stilt houses, roaming water buffaloes, dogs and pigs – were supposed to be the kind of view that would normally make me fall asleep during long overland trips. However, no matter how sleepy I actually was, the bumps due to the unevenness of the dirt road were really a head swinger for me – every time I fell asleep, the bump would shake my head and wake me up again. Nevertheless, I think I managed to catch some sleep for a few minutes.

Just before lunchtime the view turned from flat to rugged green karst mountains with thin clouds rolling over some of the highest peaks. It was truly a natural beauty, a consolation for our excruciating journey. Somewhere behind those limestone giants sat the once-sleepy town of Vang Vieng which is now infamous for tubing. We skipped it altogether and chose Luang Prabang instead.

“Food,” the driver said to us after pulling over around lunch time at a modest roadside restaurant. Skeptical at first, my eyes were then glued to two women who were having their lunch from two bowls. “Whatever is inside that bowl, it looks delicious,” I thought. Then I decided to order the same dish, noodle soup. At that time, I felt a little nauseous after the long bumpy ride. So when I noticed some ground chili on the table I added a pinch of it into my bowl for an extra kick. To my surprise, the simple noodle soup was more delectable than I previously thought. It was rich in flavor from the herbs and condiments, but the overall taste of the soup was not overpowering.

As soon as we had finished our lunch, our driver wasted no more time and got back to the driver’s seat immediately. The trip was much more enjoyable afterward, partly due to the satisfying lunch I believe. But the true highlight of the latter leg of the trip was the breathtaking and dramatic view of the vast array of rugged hills and valleys, shaded under cloudy sky. Our driver occasionally pointed towards a certain angle where the landscape was at its utmost beauty. Understanding his gestures, I quickly grabbed my camera and moved back and forth trying to find some steady positions in the high-speed minivan.

We enjoyed the majestic view for quite a long time, before it was completely covered by other cliffs and slopes. The view had completely changed by that time where traditional houses were spotted throughout the roadside, replacing the lush tapestry of greenery. At one point, I checked the time and realized that it was already eight hours since our departure from Vientiane. Then I raised a question to myself, “How much longer will this ride take?”

Eleven hours had passed by when I began noticing some billboards welcoming visitors to Luang Prabang. “Are we there yet?” I whispered. However our driver didn’t show any sign of slowing down. When I was thinking of what we should do if our minivan arrived at Luang Prabang a little late at night, the car suddenly pulled over and I heard the most comforting two words I could possibly hear on that day. The driver flashed us a big grin. “Luang Prabang,” he said. 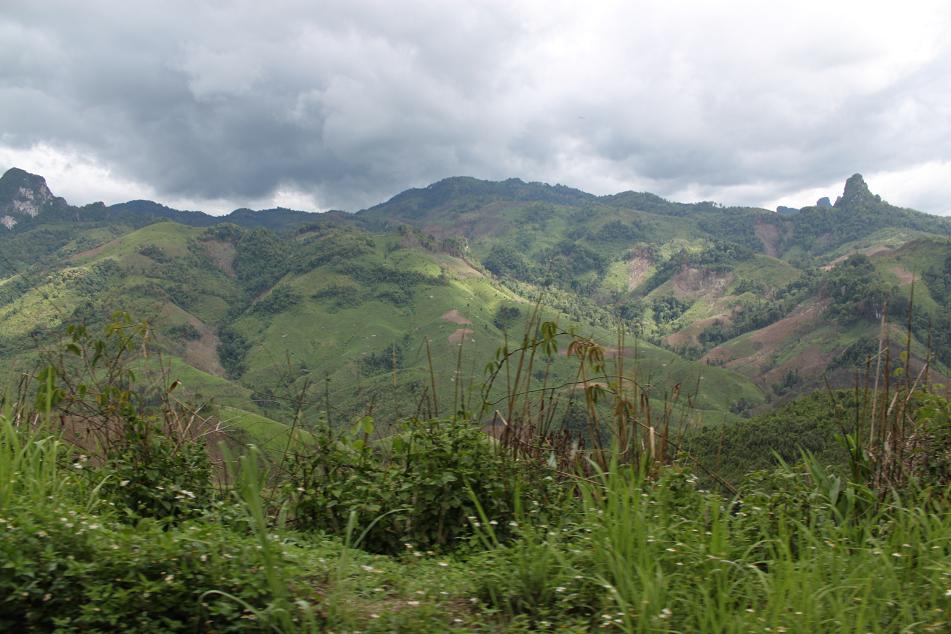 22 thoughts on “The Long Road to Luang Prabang”