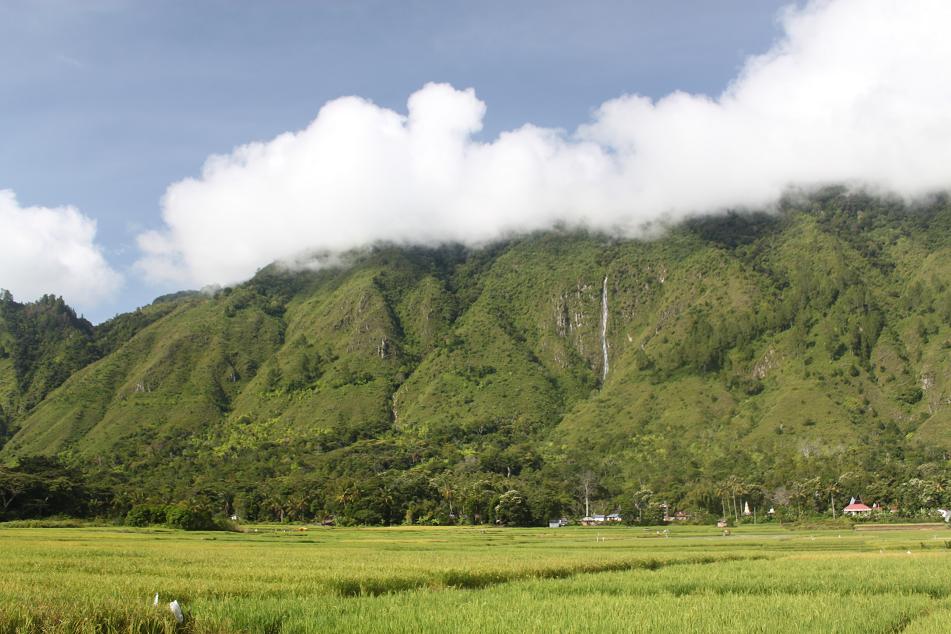 North Sumatra, especially around Lake Toba and Samosir Island, has been known as the place where Batak people, or simply Bataks, come from and flourish. Physically, Bataks are quite different from other western Indonesians (although to foreign eyes they all look the same). They have distinct jaw and skull structure which can be explained as their ancestors are neither from Mongolian nor Siamese tribes. Bataks have also been practicing their own unique rituals combining ancient animism with Christianity. They go to church every Sunday but at the same time they (especially the older ones and those who live in remote areas) venerate banyan trees as they are believed to be the tree of life from which all living creatures came from. Despite nestled by Muslim kingdoms: staunch Acehnese to the north, matrilineal-Muslim society of Minangkabau to the south and Malay kingdoms everywhere else in Sumatra, Bataks (or most of them) have been devout Christians since the introduction of the religion by European missionaries in the 19th century.

Prior to the arrival of the missionaries, Bataks were infamous for their cannibalistic tradition – devouring the flesh of slain enemy and those who were found guilty. However they were anything but primitive since they had already developped an advanced writing system and culture. The cannibalism had long gone. What remain in the island are churches, ancient tombs, traditional houses and very friendly people who will greet every foreigner visiting their beloved island.

As I found myself riding a motorcycle to visit some historic places on Samosir Island, I constantly had to make some stops just to take some photographs of the majestic landscape laid before my eyes. Rolling clouds over towering hills, green and yellow rice fields, a waterfall, colorful churches and tombs, and of course, the view of Lake Toba are some of the most alluring things that I witnessed during my exploration of the island on a motorbike. 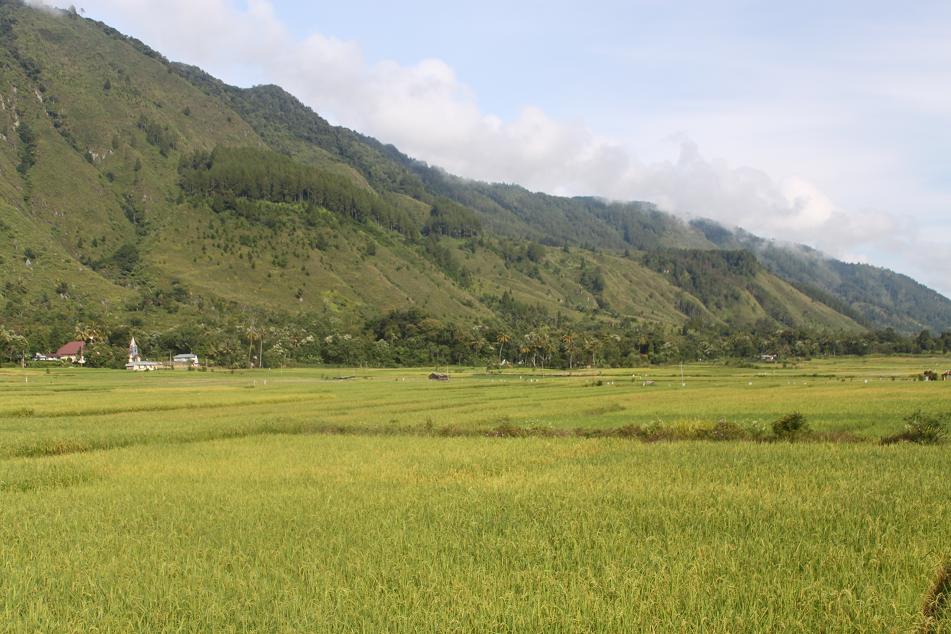 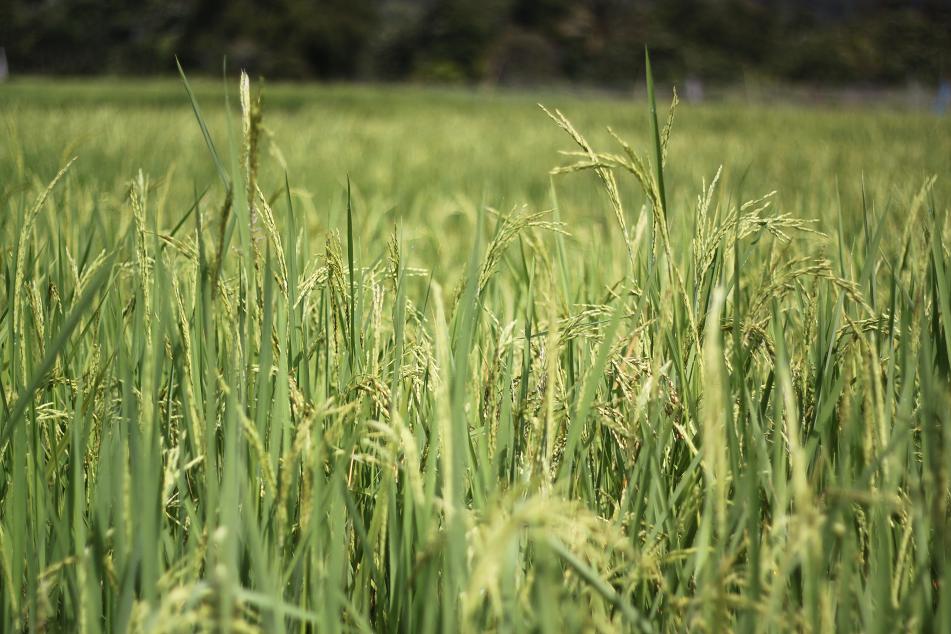 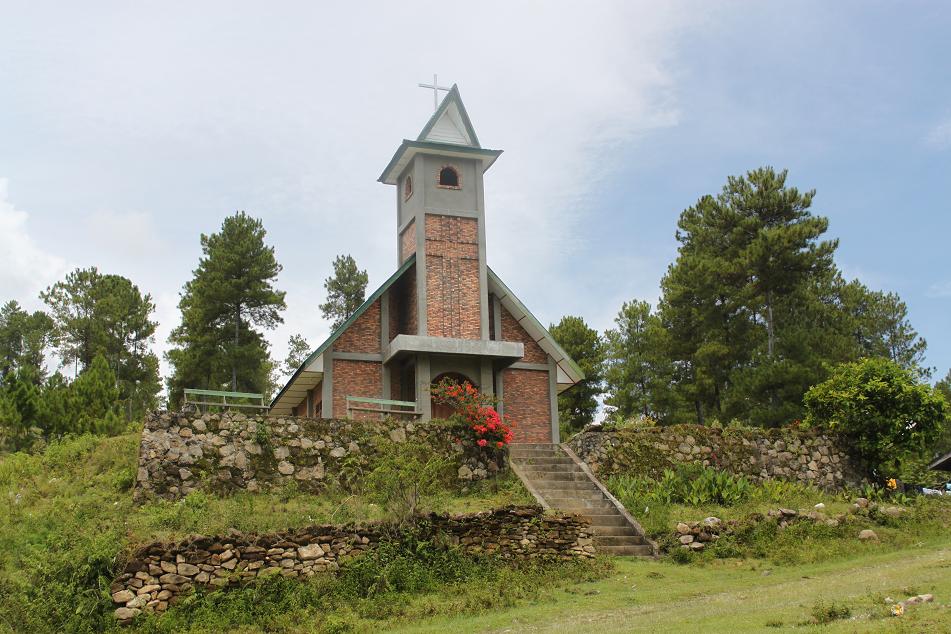 A Church on The Top of A Hill 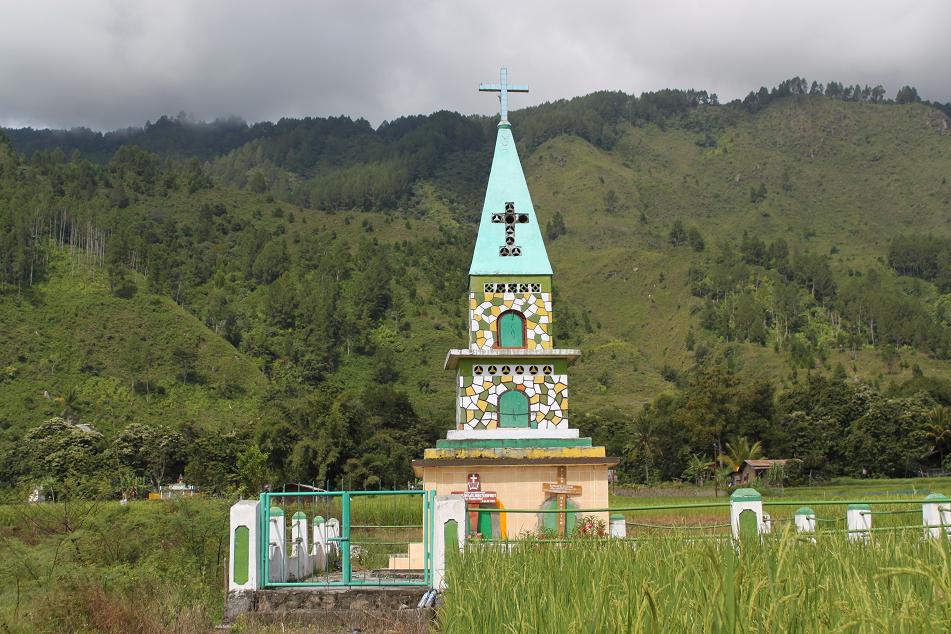 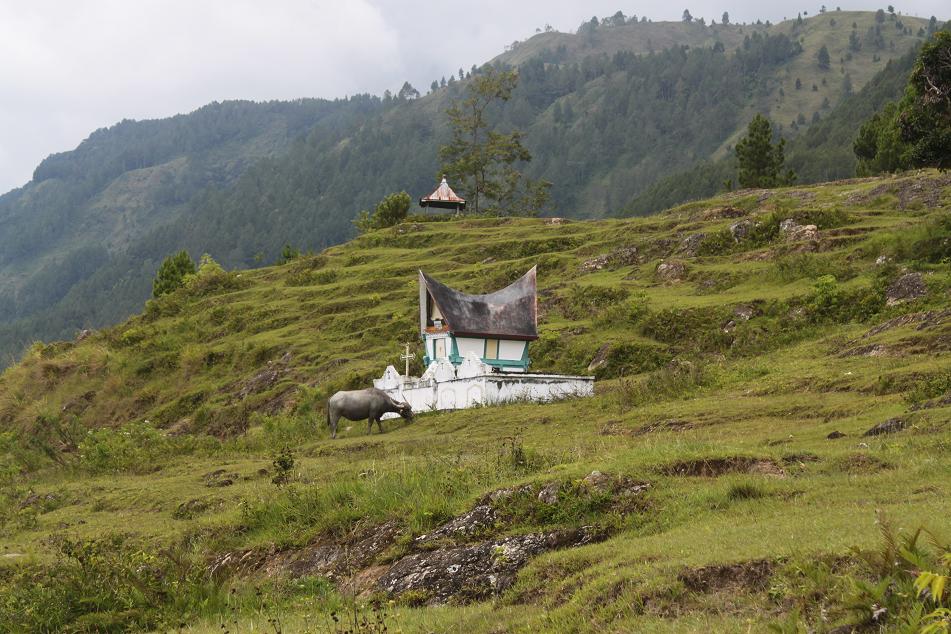 Another Tomb Decorated with Batak-Style Roof 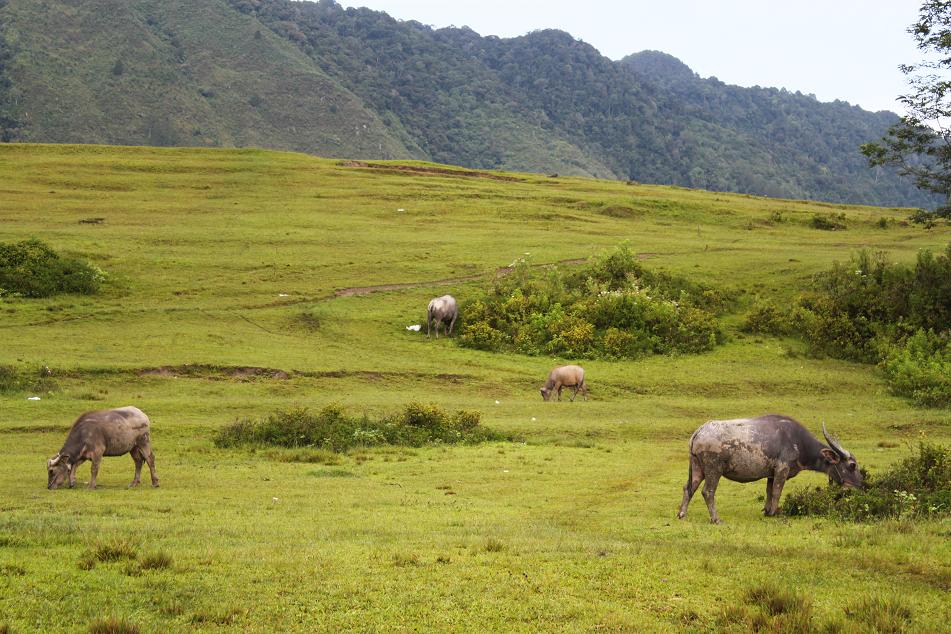 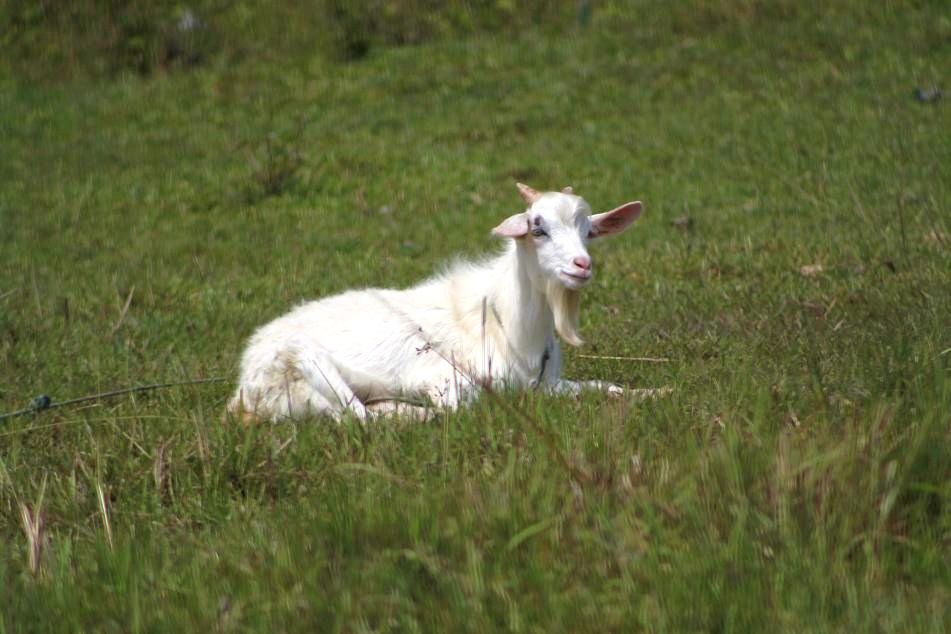 A White Goat Enjoying His Time

Nevertheless, I encountered a cultural shock which I didn’t anticipate at all. As an Indonesian and having grown up in Indonesia, meeting with different people from different cultures and languages have been part of my life. Despite the language diversity, I have never had any difficulty nor misunderstanding to order a cup of tea everywhere I travel within the country. Teh which means tea is the word that every Indonesian, from the northern tip of Sumatra to the easternmost point in Papua, understands. Or so I thought. When having a breakfast at Tomok – a small town just south of Tuk Tuk – with my friend, Robin, who came with me on this trip, we ordered a cup of teh manis, or tea with sugar, for drink. Then the woman at the food stall brought a glass of warm water. My guess was she would come back with some tea bags or dried tea leaves and sugar. She did come back, but she brought napkins and toothpicks instead. Then she asked the question “would you like some more tea?”. That’s when Robin and I stared to each other and agreed in silent that we just encountered a cultural, or linguistic to be precise, shock. It turns out for some people tea and sugar mean plain water. As we walked back to our bike after paying for the meal we laughed at that funny thing that had just happened to us.

The cultural shock only struck once, apparently, since we didn’t encounter any problem at all when having lunch at a restaurant which is recommended by Lonely Planet. I had a rather pricey but delicious barbecued local freshwater fish called Tombur. The fish was huge and the barbecue sauce was scrumptious. To balance the intense flavor of the barbecued fish, I had a very refreshing juice of terong belanda (Cyphomandra betacea or tamarillo) for drink. All in all, it was such a delightful lunch after wandering around the island and some ancient cultural sites on a motorbike. 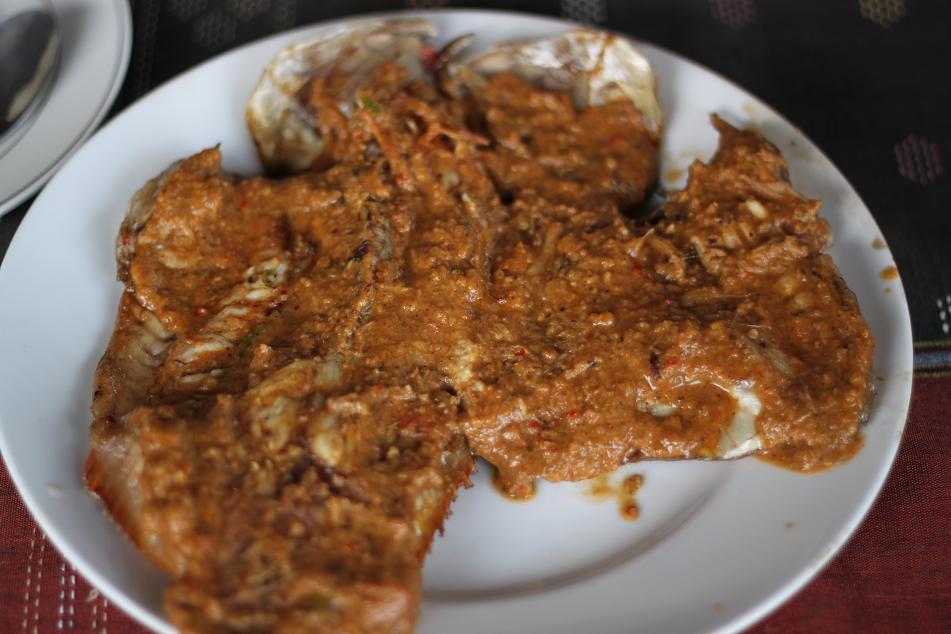 Related Posts: Lake Toba: Nature’s Wrath Turned Into Eden, The Legend of Samosir’s First Settlers, The King, The Missionary and The Trial Stone, Dance and Swing Until The Egg Breaks

36 thoughts on “The Intriguing Culture of Samosir Island”