Kowloon’s Skyline (Top of ICC Tower was Covered by Fog)

Foggy. That is how I describe my first two days in Hong Kong. When I arrived at Chek Lap Kok International Airport, I decided to go to the city by bus to get a better view of everything along the way from the airport to the city center than going by the MTR trains. Unfortunately it was raining that night and the bus that I took does not have wipers on its upper deck. So, not much to see then. However, I did get a glimpse look at the two suspension bridges that connect Lantau Island (where the airport is located) with Hong Kong Island. Nevertheless, I do recommend taking the bus when the sky is nice and clear (I took bus A11 which goes all the way from the airport to Causeway Bay where the hostel that I booked is located).

After almost one hour riding the bus, going through bridges and tunnels, finally I arrived at Causeway Bay on Hong Kong Island. My first impression about this particular part of Hong Kong is it is packed with people walking around blocks of shopping centers, stores, restaurants and everything else. Well, it was Saturday night. That is what happens to all places on Saturday nights, right? (I found out that I was wrong later after spending a few more days in the area).

The hotel where I stayed at was presumably one of the most unpleasant hostels where I have stayed at because it is located in an old apartment with small rooms and gloomy bathrooms. But then I realized that this is Hong Kong, where property and rent price per square meter is one of the highest in the world. So, considering how cheap I had to pay for the hostel and its great location at Causeway Bay, I must say that it was a very great deal.

After checking in at the hostel, I walked around Causeway Bay to familiarize myself with the neighborhood. Then I wandered aimlessly, strolling from one block to another until I found this highway where I could see quite clearly the 2 International Finance Centre (IFC) tower at the far end of the highway and also the International Commerce Centre (ICC) tower across the strait which both are the tallest buildings in Hong Kong SAR (Special Administrative Region) and located at Hong Kong Island and Kowloon respectively. But as I said earlier that it was a foggy day and I barely could see the top of both buildings because they were covered by the fog. 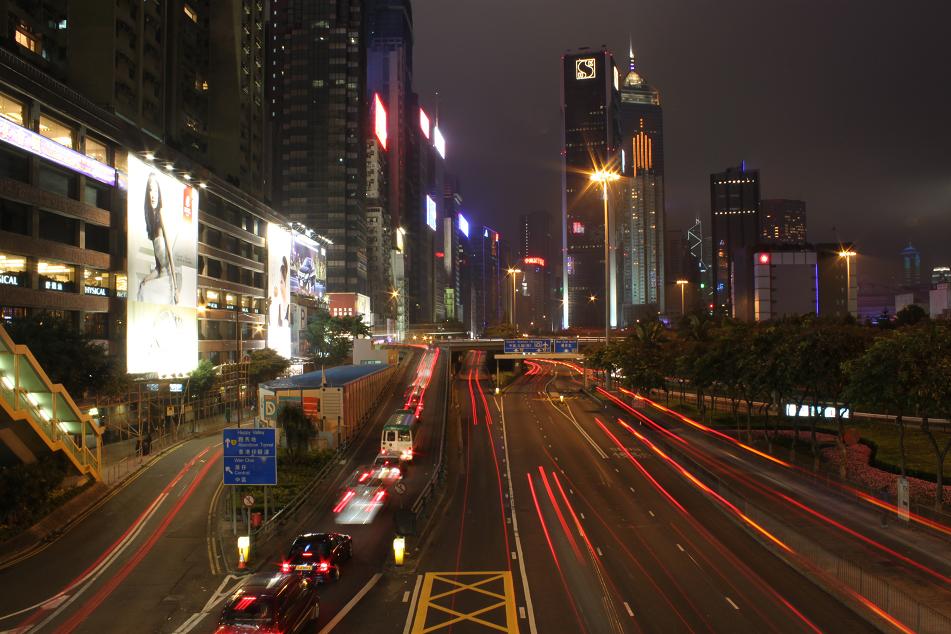 After snapping some photographs, I looked at the city map and searched for anything interesting around the area. Then I noticed this place on the map which is called the Golden Bauhinia Square. I did guess that Bauhinia is a flower, but I did not know that it is the flower which is depicted on Hong Kong’s flag (I found out about this on my third day in Hong Kong). The air was rather chilly that night, therefore walking around was quite a pleasant thing to do, at least for me because I did not sweat at all.

After a few wrong turns, I finally arrived at the square and found a small Golden Bauhinia statue in front of a gigantic exhibition center. Apart from them, actually it is the skyline of Kowloon which drew visitors’ attention the most. I only spent a few minutes there before deciding to head back to the hostel to get some decent amount of sleep in order to prepare myself for the next day’s trip around Hong Kong.

ICC Tower As Seen from The Golden Bauhinia Square

Tips: In my opinion, the first thing that you have to do as soon as you arrive in Hong Kong is getting an Octopus Card. If you arrive by airplane, you can buy it at the Airport Express counters at the arrival hall. However, if you want to take the bus to the city, just tell the ticket officer that you only want to buy the Octopus Card, not the train ticket. It costs you HK$ 150 (HK$ 100 for the balance and HK$ 50 for deposit).

Related Posts: An Even Foggier Day in Hong Kong, The Exploration of Hong Kong’s Alleys and Beyond

10 thoughts on “A Very Foggy Day in Hong Kong”