Imagine an alternate world where ninth-century cathedrals across Europe and mosques throughout the Middle East and North Africa were buried deep in the ground for centuries until being rediscovered in the 20th century. People only knew a little about their existence, mostly from stories told over many generations, until the fork-hoes and plows of modern-day farmers hit something hard – the long-gone places of worship themselves – while preparing their land for the next planting season. In the real world we live in, this is in fact what happened (and will always happen) on Java, an elongated island near the equator that is peppered with more than a dozen active volcanoes, rocked by powerful earthquakes from time to time, and showered with abundant rainfall. All of this combined makes its soil one of the most fertile on the planet, and where there is fertile land, civilization thrives.

Apart from the larger ancient temples like Borobudur and Prambanan which had never been completely buried despite suffering from the brute forces of nature that have shaped and reshaped the island, most structures built in the Hindu-Buddhist period of Java had fallen into oblivion as they were hidden underneath the ground for centuries. Some of them were accidentally rediscovered by local farmers, but many are believed to remain covered by thick layers of soil and volcanic ash. One such structure that has finally been kissed by the sun and drenched by the rain again after slumbering in darkness for hundreds of years is Candi Sambisari, a ninth-century Hindu temple dedicated to Shiva, one of the principal deities in Hinduism.

In 1966, a farmer was working on a plot of land to the northeast of the city of Yogyakarta when suddenly his hoe hit a piece of stone made of andesite, a type of volcanic rock that was used in ancient Java to build Hindu and Buddhist temples. Upon closer inspection, the stone bore some carvings, and this marked the beginning of the unearthing of Candi Sambisari – candi is a term Indonesians use to call any ancient Hindu and Buddhist temples. Following strict guidelines, it took 21 years to fully excavate the site and reconstruct the temple as close as possible to its original appearance, and it was seven or eight years later when I first learned about the existence of this cultural heritage. However, it was only last year, in the middle of Java’s dry season, that I finally paid this temple a visit.

Our driver, Nur, navigates his mini MPV down small country lanes to reach Candi Sambisari. Usually when I’m approaching the site of an ancient temple in Java, its upper structure beckons from a distance, building up my anticipation. However, this is not the case with the one we’re heading to. As Nur pulls over, the ancient temple is nowhere to be seen, but this is expected since I know that the Candi Sambisari compound lies lower than the ground surface of its immediate surroundings. But I hadn’t anticipated its size. What I thought was a small ancient temple complex turns out to be much larger as James and I enter the gate and walk toward the stairs at the compound’s western approach. We go down the steps to reach the outer ancient walls, and keep walking for a few meters to get to the inner walls with a gateway which might have been adorned by an arch during the heyday of this place.

Three perwara (ancillary) temples stand to the west of the largest structure, but none of the former have been restored to their original appearance. What remains in two of them are only the lower half of the walls, while the other one has been reduced merely to its base. The main temple, however, is in a much better condition; most of its original stones were still intact during the excavation which allowed for a more complete reconstruction. At the base of the staircase that leads up to the temple’s sanctum are two Makara heads, each of them supported by a gana (a dwarf character often depicted in an almost squatting position with his two hands raised above his head). Meanwhile, the temple’s walls are adorned with floral patterns with conch shells carved at the center of some of the bas-relief panels. On the north, east and south sides of the temple’s walls are niches in which statues associated with the worship of Shiva stand, including one of Durga Mahisasuramardini (Durga slaying the buffalo demon) that is in relatively good shape. We climb up the stairs to reach the dark sanctum. Inside, a lingga/lingam sits atop a yoni, both acting as symbolic representations of Shiva and Shakti (the embodiment of Shiva’s feminine energy).

These structures were once buried in the ground for centuries

The western approach of the temple compound

Walking toward the main temple

Candi Sambisari’s most important structure where the sanctum is located 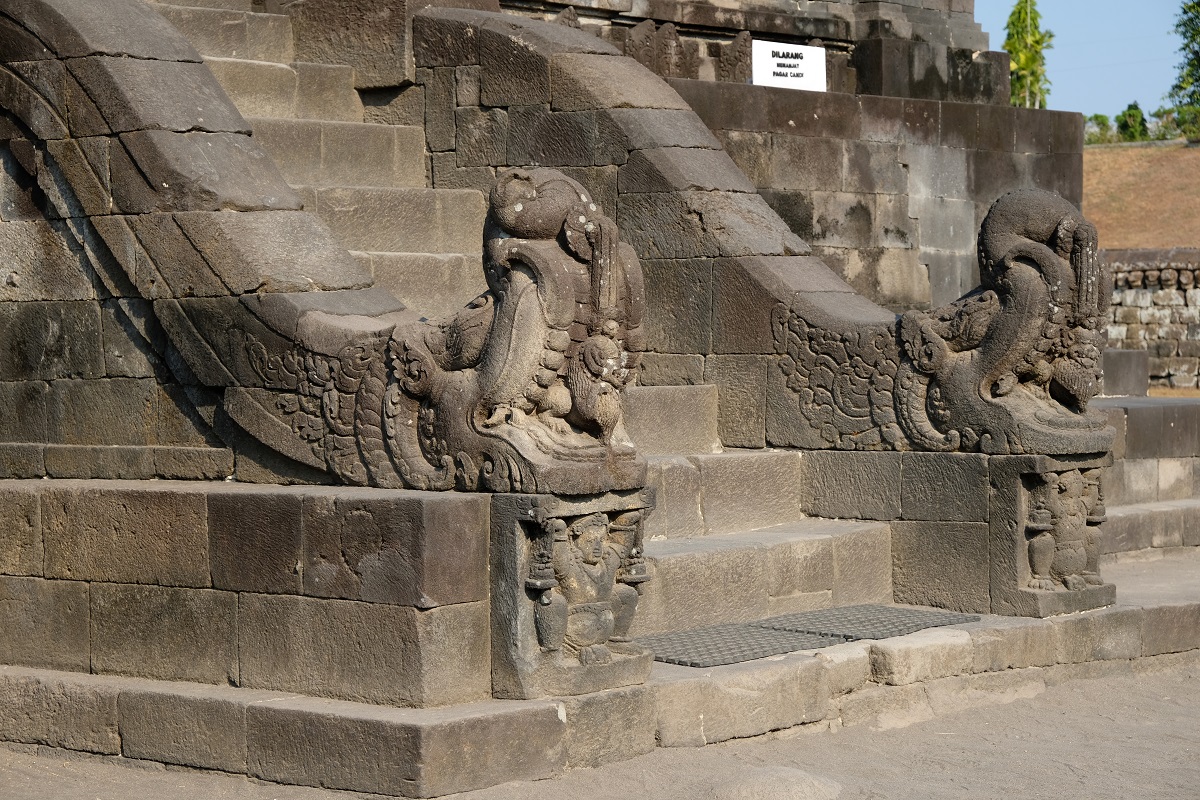 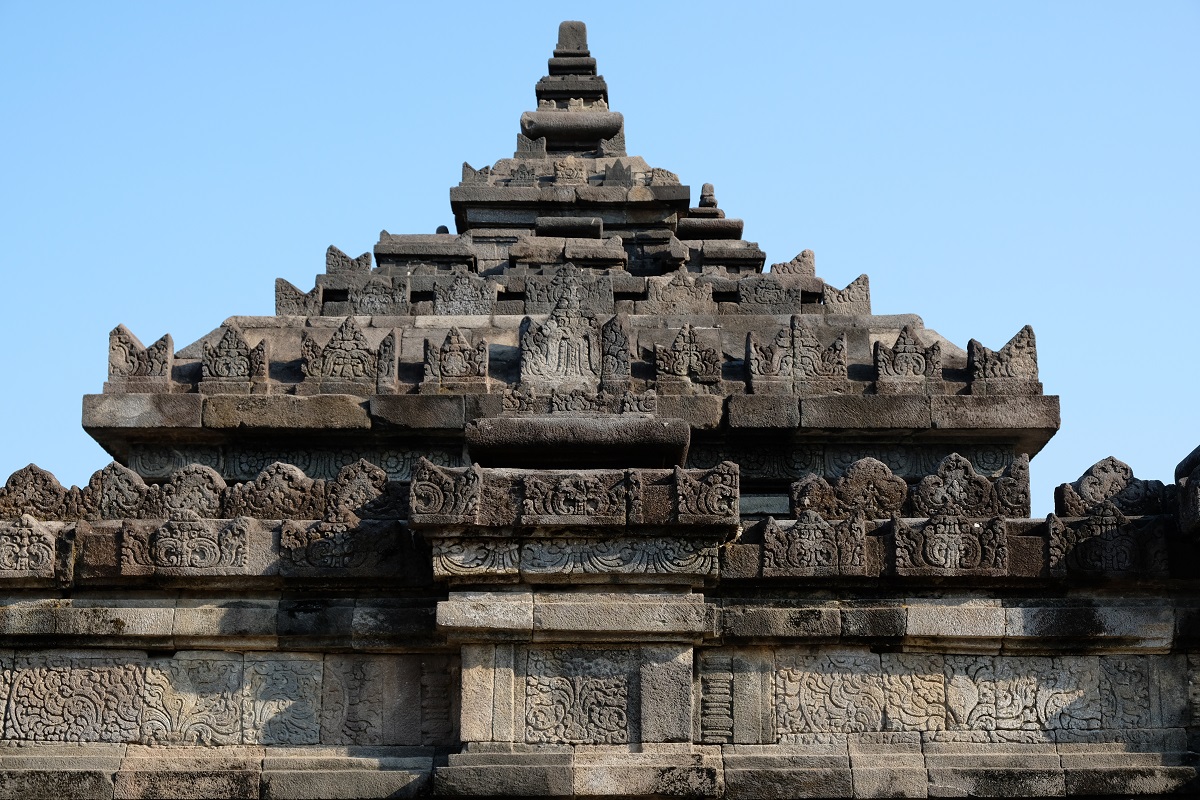 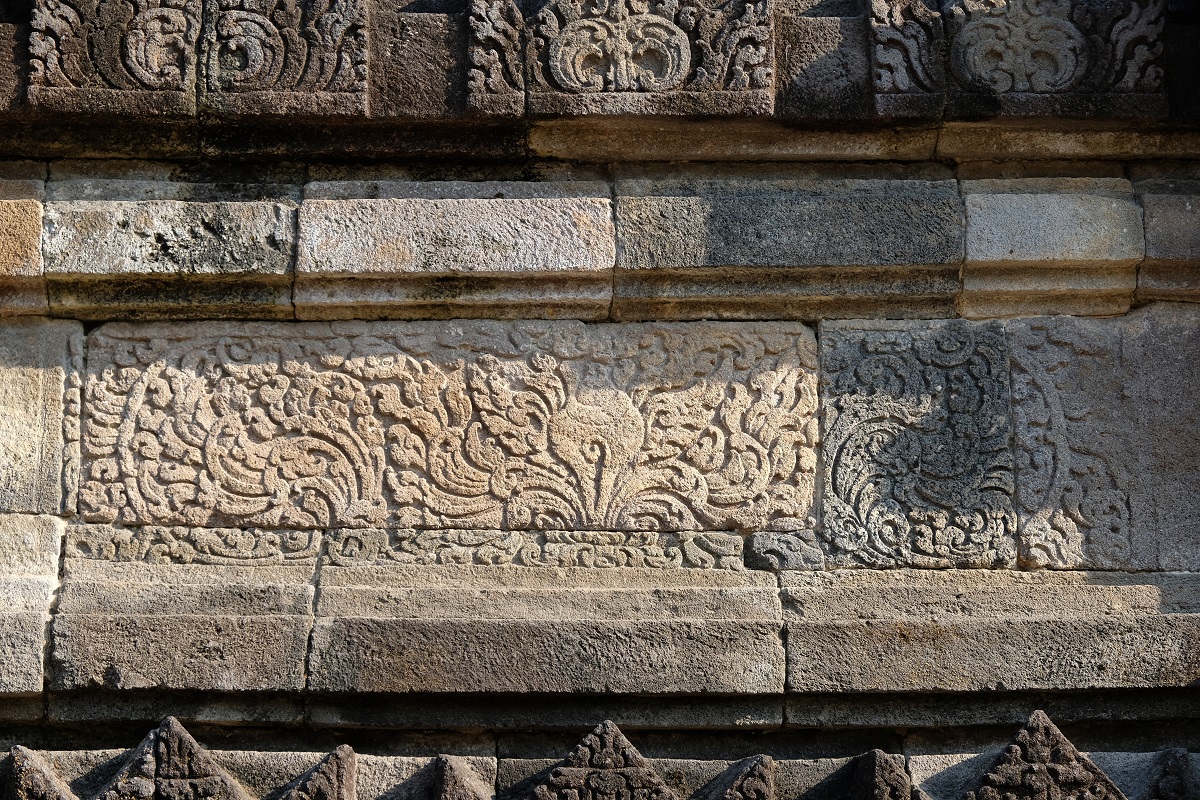 A bas-relief panel with a conch shell at its center

Going up to reach the sanctum

Durga Mahisasuramardini, one of the statues adorning the main temple’s outer walls

A Naga head carved on a yoni inside the sanctum

It’s fascinating to think that for a long time generations of people who once lived in the village where Candi Sambisari is located were unaware of the existence of this beauty in their own backyard. Its location a little over 24 kilometers to the south of Mount Merapi – Java’s most active and unpredictable volcano – was the reason why this temple compound was eventually buried deep underground. The risk is still present, though, although the direction of Merapi’s lahars change from time to time. We walk inside and around the main temple before deciding to return to the stairs that take us back to ground level, more than 6 meters above the base of the temple. Prior to this trip, James, who had heard about another ancient temple called Candi Kedulan, proposed a visit this lesser-known ruin right after Candi Sambisari due to their relative proximity to each other.

Nur, who apparently lives not far from Candi Sambisari, takes us through small roads that connect villages as opposed to backtracking to the main artery. He claims it’s faster to take this route, and because he’s a local we trust him. Of course he’s right; it only takes us ten minutes to reach Candi Kedulan. However, no other visitors are in sight. In fact, the entire temple compound, which was also buried by lahars in the past, is still undergoing reconstruction work with its main entrance closed and a perimeter fenced off by barbed wire, probably to discourage looters. Its peaceful ambiance, however, makes up for our slight disappointment for not being able to come closer to the structures within the Candi Kedulan complex. In many ways, it reminds me of Candi Sambisari for both temples were built around the ninth century and now sit below the ground surface, thanks to multiple eruptions of Mount Merapi over the centuries. But there is one significant difference: while Candi Sambisari’s main temple faces west, Candi Kedulan’s largest structure faces east.

Everywhere I look there are signs of ongoing restoration work in this place. Semi-transparent netting usually used at plant nurseries cover the perwara temples, most likely to provide workers with protection from the sun while they meticulously arrange the stones back in their original place; a small excavator sits idly at the eastern fringe of the temple’s perimeter; and a small truck rests at the far end of the compound, probably used to transport layers of soil from the site. Candi Kedulan was discovered by local sand diggers in 1993, but it took more than 25 years for reconstruction work to begin in earnest. This makes me think of Candi Losari, a smaller Hindu temple outside Jogja which was also buried in the ground for centuries but only rediscovered in 2004. Currently no one, apart from ancient heritage enthusiasts, visits this intriguing place. But that may one day change if larger-scale reconstruction work is carried out on this site.

Both Candi Sambisari and Candi Kedulan have shed more light on the cultural scene in Java when Hinduism and Buddhism were the dominant religions on this island. I believe there are still a lot of other temples hidden deep in the ground beneath our feet. Some of them may still be intact, but some others may not be as fortunate since Java is after all the most developed part of Indonesia – houses and factories may stand right on top of some of these ‘lost temples’. However, in our next exploration of Jogja’s ancient temples, instead of going down below the Earth’s surface, we go up to a hill where a majestic 10th– or 11th-century temple compound stands gracefully on top, overlooking the city’s old airport and some of the bigger structures that were built during Java’s classical period. 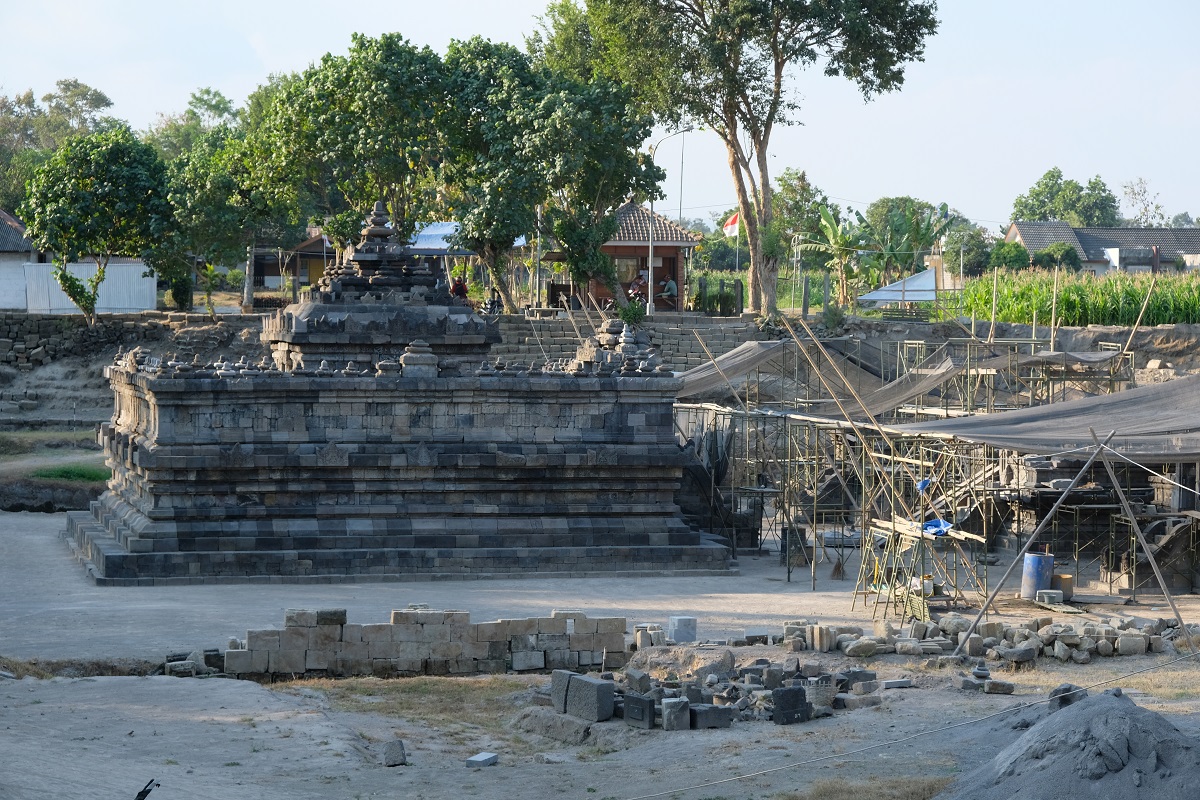 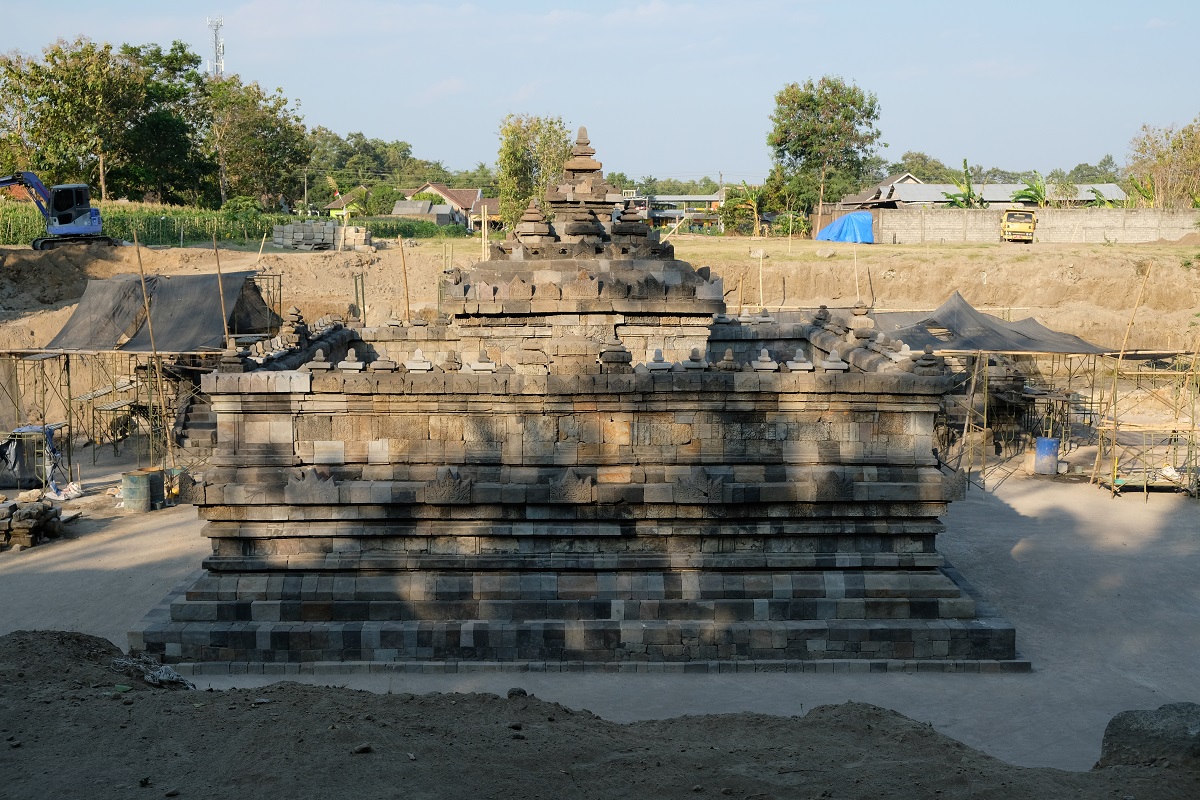 The west side of the main temple 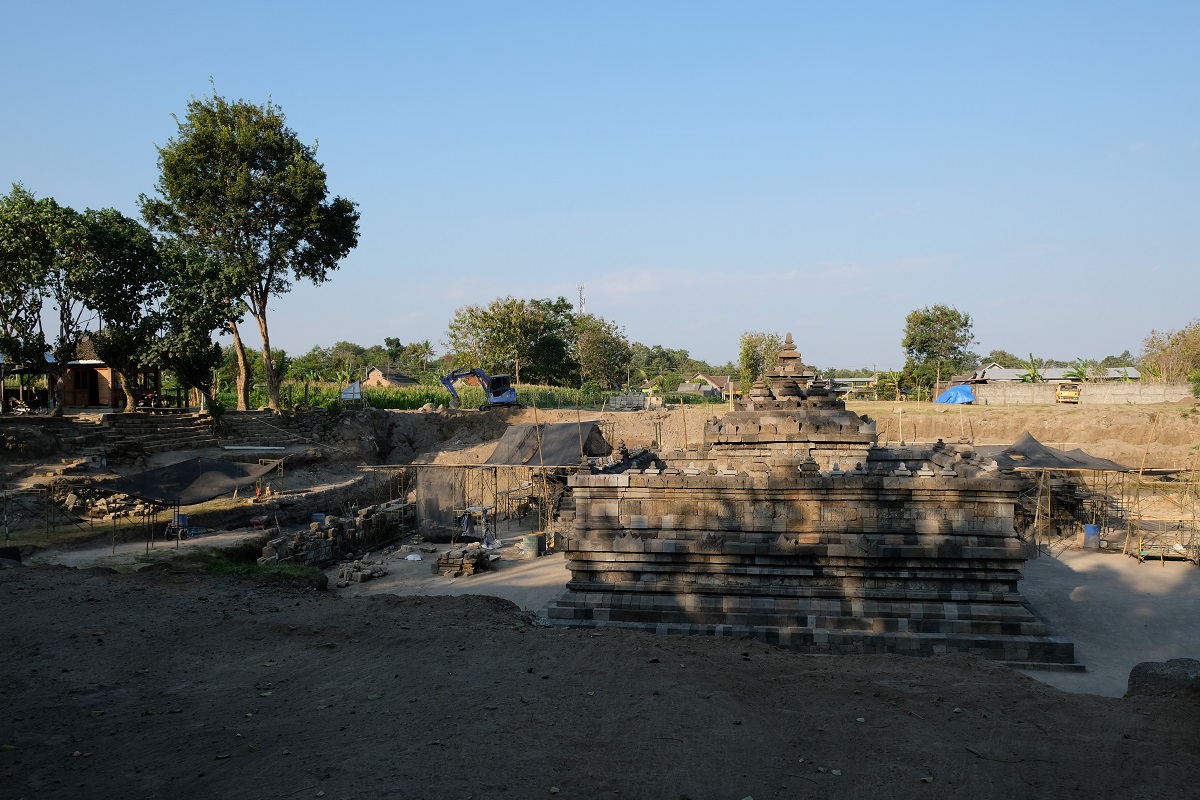