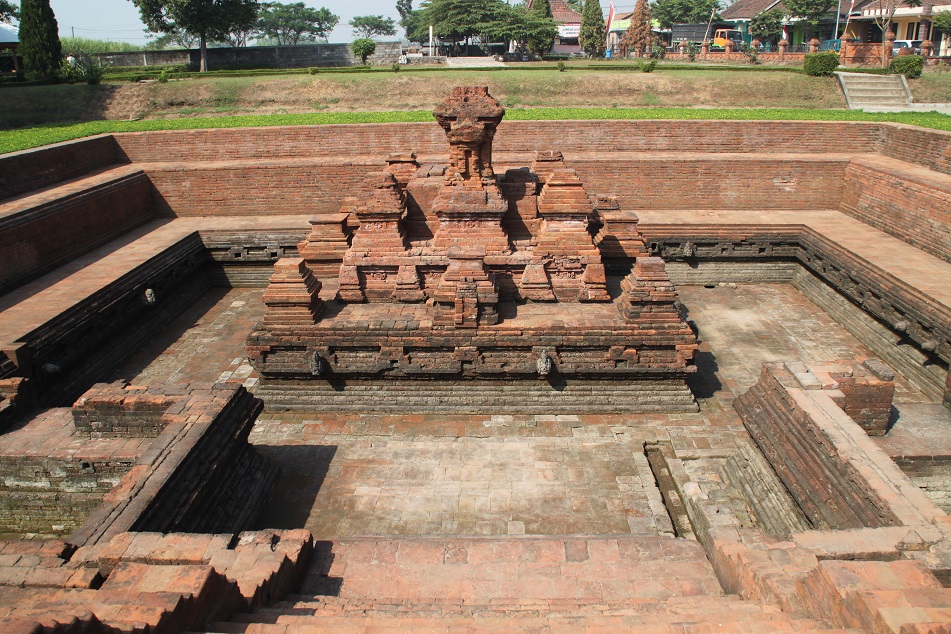 Walking down to Candi Tikus

I am standing in front of Candi Tikus, its red brick structure almost entirely below ground level as if the earth was purposefully dug out so that it could fit inside. A flight of stairs made from the same material acts as the only entrance way to this centuries-old site which might have functioned as a bathing place or a setting for purification rituals, although scholars have differing opinions on whom this structure was built for: the royal family or common people?

I walk down the ancient steps toward the bottom of the compound which is water-less at the height of the dry season – images I’d seen on the internet show the site filled with knee-high water. No written document or inscription has been found regarding this structure, but from its architectural style experts believe it was constructed between the 13th and 14th centuries, a time when the Hindu-Buddhist Majapahit kingdom controlled this part of Java.

During its heyday, Majapahit’s namesake ancient capital (on the site of Trowulan) had an extensive network of canals and reservoirs which together measured up to 26 kilometers long, and Candi Tikus was a part of this sophisticated water management system. Inspired by Mount Meru – the sacred peak in Hindu and Buddhist cosmology – Candi Tikus’ main tower stood above four smaller pinnacles. Around its base are dozens of water spouts in the shape of makara (a mythical sea creature in Hindu-Buddhist culture) and lotus buds, each of them finely carved from andesite stone as opposed to red brick which made up the rest of the compound. This beauty, however, would have to fall into obscurity as the once powerful Majapahit grappled with its own demise.

Encountering the same fate that befell other Hindu-Buddhist temples and edifices as Islam gradually became the dominant religion on the island, Candi Tikus was eventually forgotten. Some ancient sites were left unattended which gave way to Mother Nature to slowly reclaim them; it was not unusual for the Europeans to discover these structures partially or entirely covered with moss and shrubs during the colonial period. Java’s volcanoes and seismic activity also contributed to the complete abandonment of these sites. Many centuries- or even millennia-year-old sites ended up buried in the ground, slumbering in darkness for generations until their rediscovery – even in the 21st century a number of ancient structures and statues are still being unearthed on Java.

For hundreds of years, Candi Tikus was hidden from sight until. However, its rediscovery in 1914 was anything but suggestive of its past glory as a beautiful bathing temple. As the local farms were infested by rats, the 20th-century residents of the village of Temon in Trowulan traced back those rodents to a mysterious mound where, upon further inspection, it was revealed that an ancient brick structure was buried underneath. The rats – tikus in Indonesian – have unfortunately been associated with this structure ever since. Excavation and reconstruction were subsequently carried out by the colonial Dutch administration, and in the 1980s the Indonesian government conducted a thorough restoration of the Majapahit-era compound. 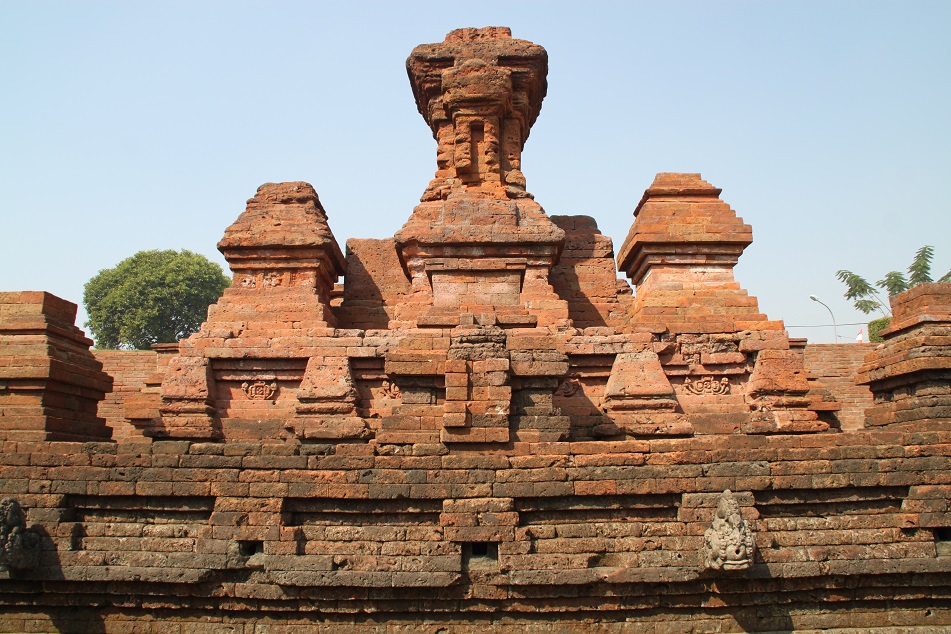 For centuries this structure was buried and forgotten 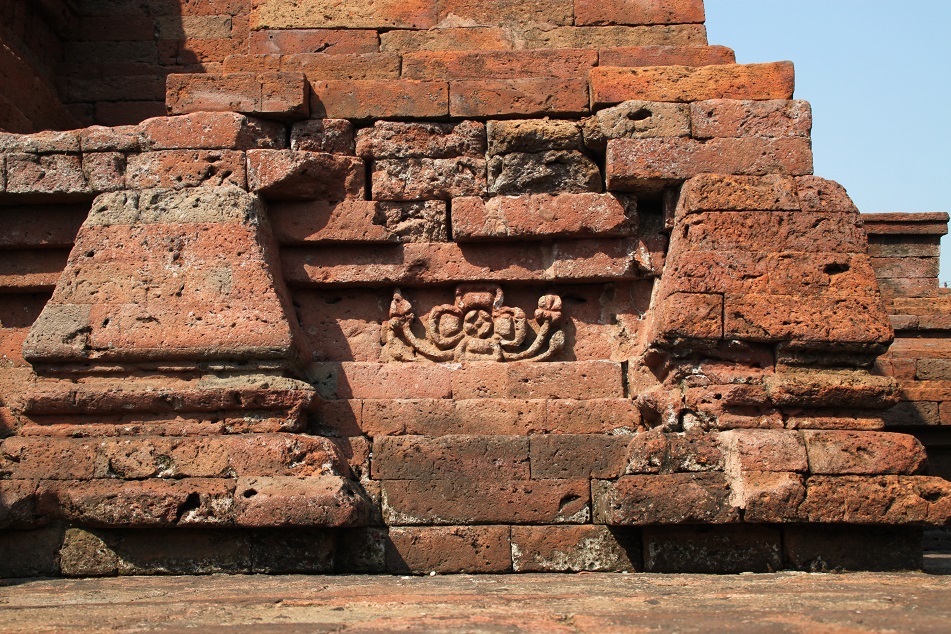 This flower finally saw the sun again in 1914 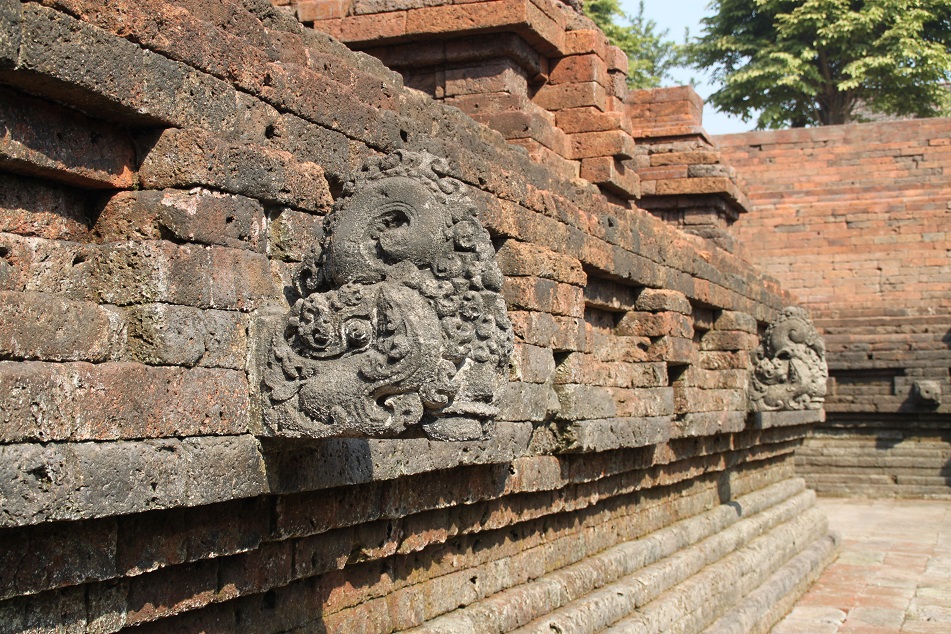 Ornate water spouts around the base of the structure 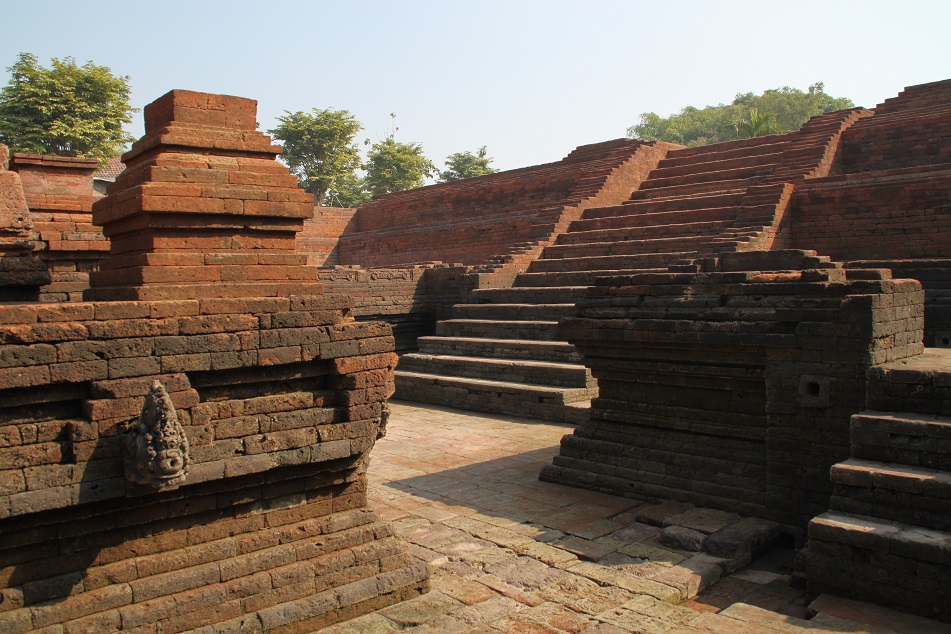 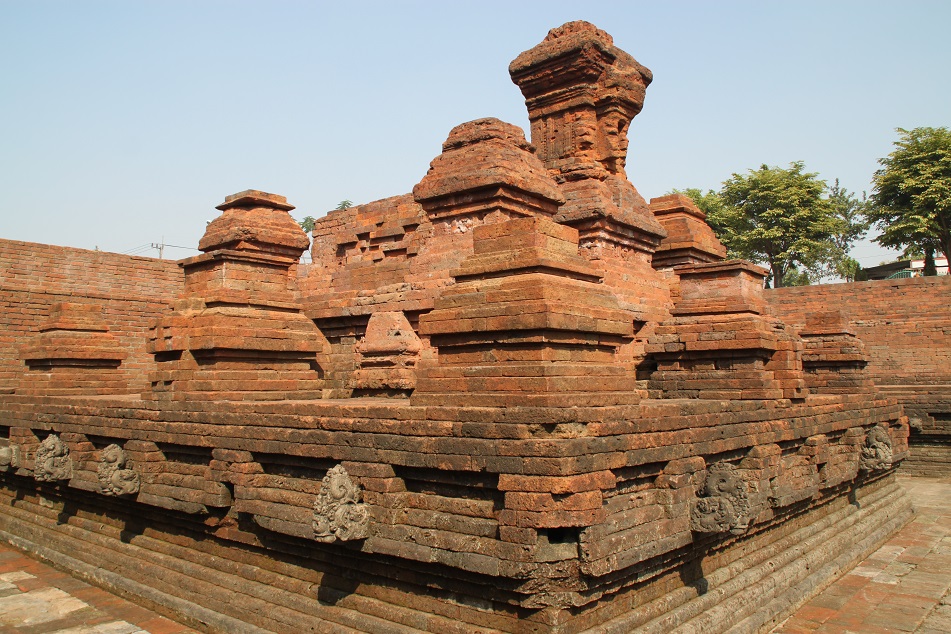 Inspired by the sacred Mount Meru 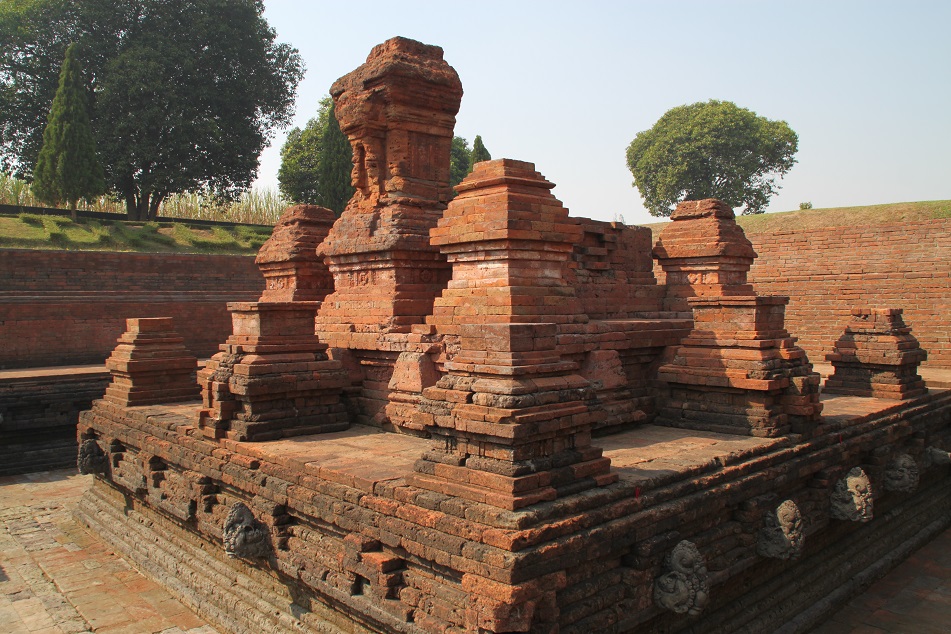 Candi Tikus in the morning sun 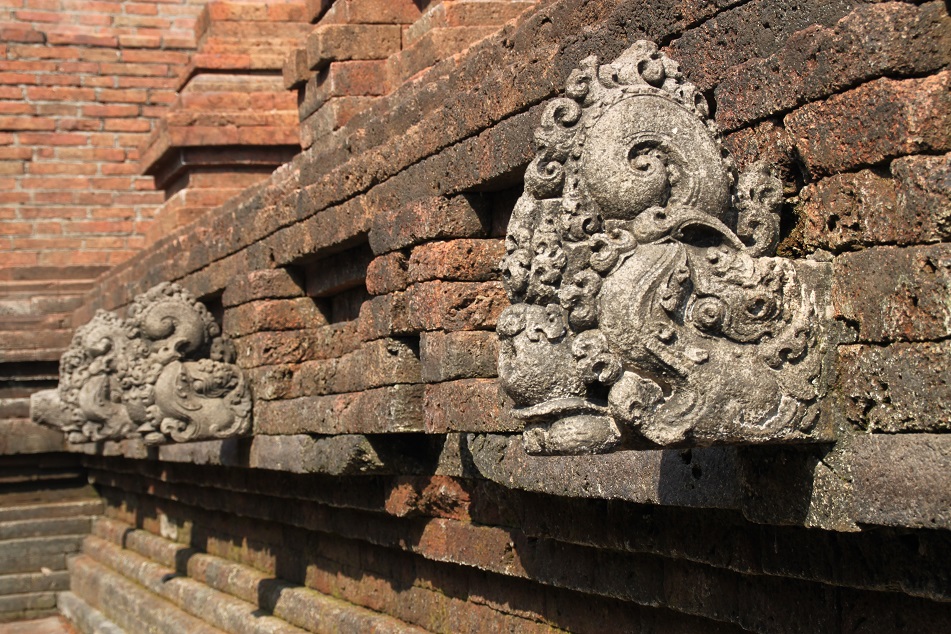 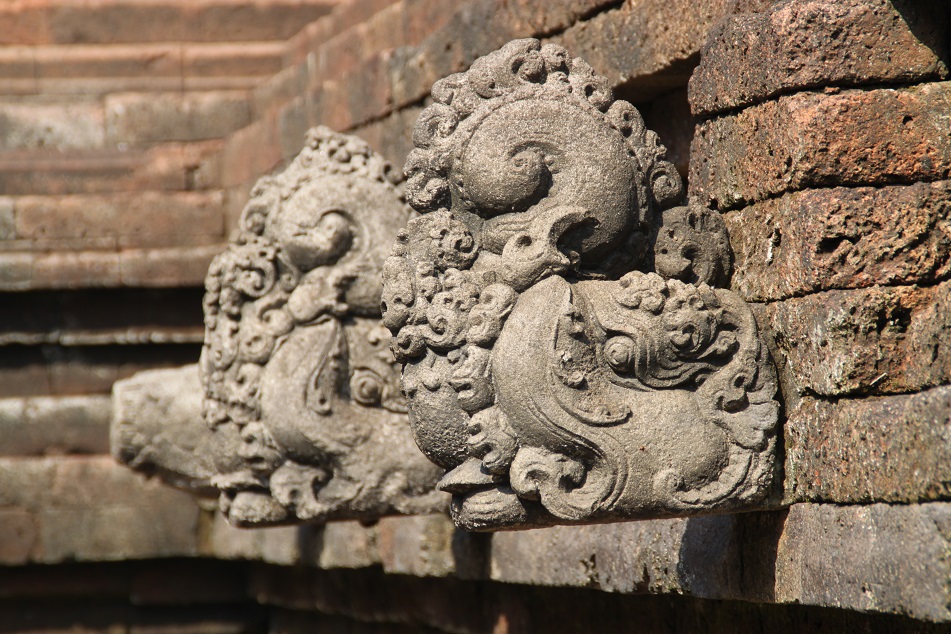 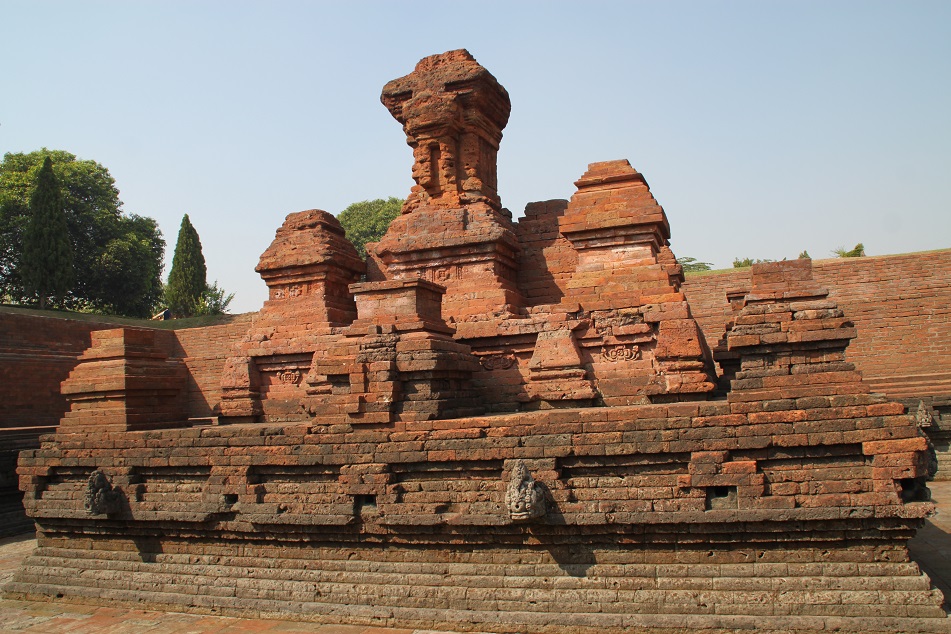 Roughly five kilometers to the northwest of Candi Tikus, passing modern-day houses, shops, roads, corn and sugarcane plantations, lies another ancient structure, a survivor from the East Javan classical period many centuries ago. Standing tall in solitude, Candi Brahu is the highest temple in Trowulan, although the lack of information on it has left scholars broadly estimating that it was built between the 10th and 15th centuries. The contrast between this imposing edifice and Candi Tikus’ below-ground-level structure couldn’t have been starker, but the two, like most ancient sites in Trowulan, were made from the same material: red brick.

Unlike other ancient Hindu-Buddhist temples or structures that I have visited in Indonesia, Candi Brahu is devoid of any reliefs on its façade. Its rather austere look, however, is compensated by the curiously curving outline of its midsection, achieved through the application of layers of brick with different lengths and widths. Upon closer inspection, this part of the ancient temple wouldn’t look out of place today in a world where modern architecture is the preferred style for anything from houses to offices and restaurants. Going up to the large niche on the temple’s west façade is unfortunately not allowed, probably to preserve the entire structure for some people still sadly resort to vandalism – mainly engraving their names on ancient bricks or stones as has happened to a few smaller temples across Java.

Thanks to the direction its main sanctum faces, the afternoon is the ideal time to visit Candi Brahu, when its red bricks are beautifully bathed in softer hues of the sun. We stay until closing time, marveling at the band of luminous bright ocher cascading down the western face of the temple. Upon leaving I wonder how Trowulan must have looked like had most, if not all, the structures dating back to the Majapahit period survived to this day. Maybe it would have reminded me of Bagan, albeit with a more modest skyline. 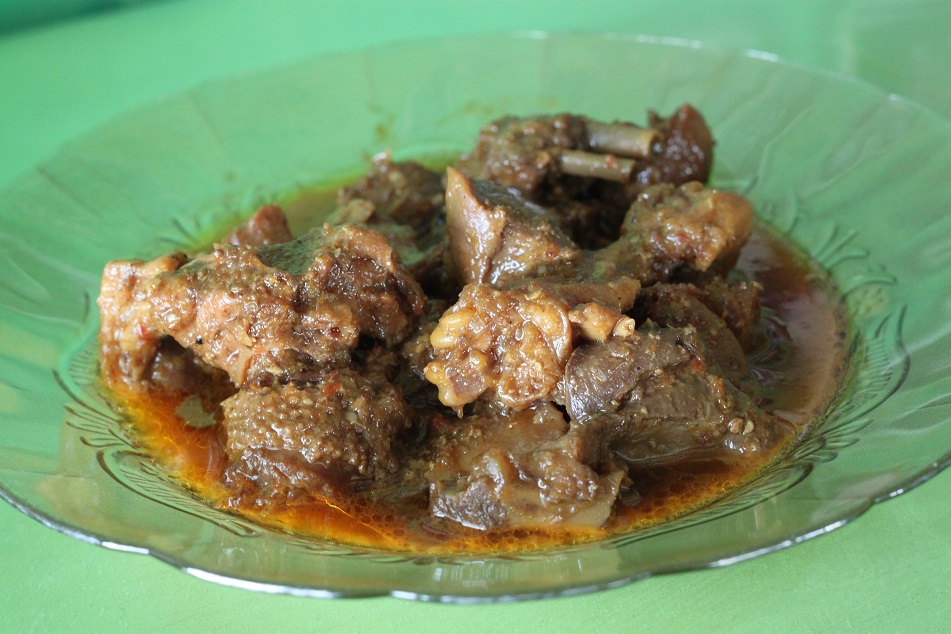 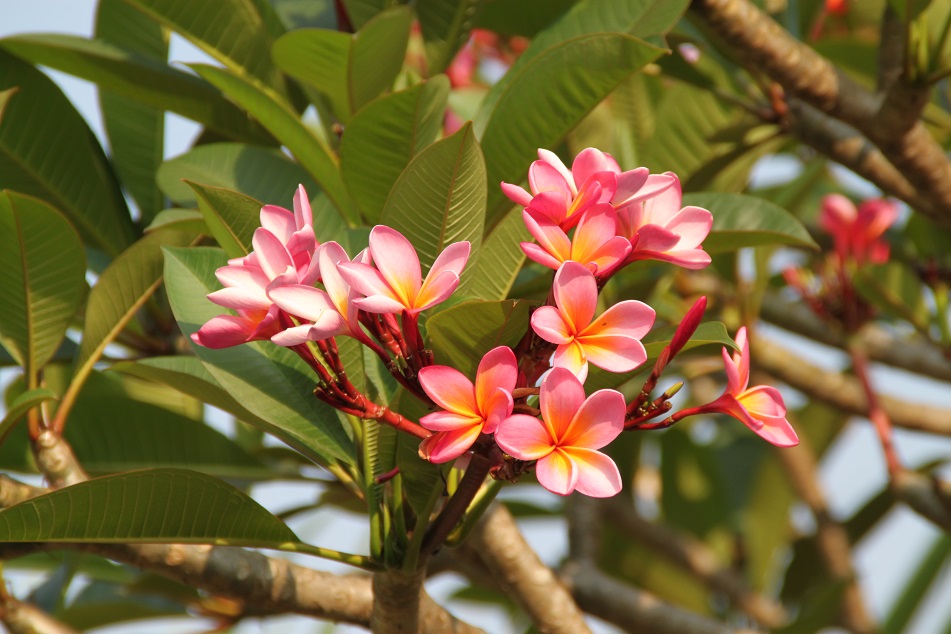 Pink frangipani on the grounds of Candi Gentong 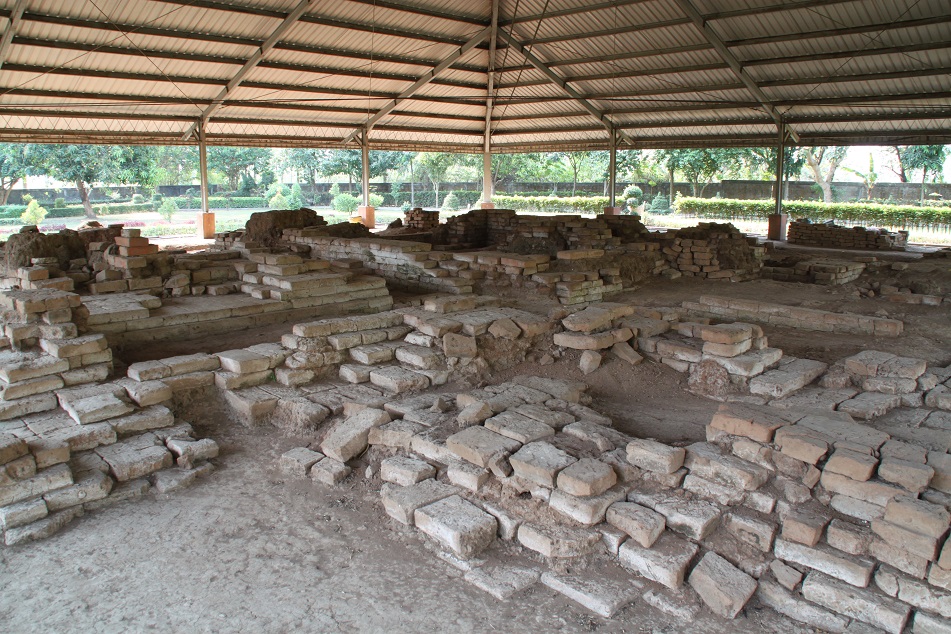 The smaller structure of the Candi Gentong compound 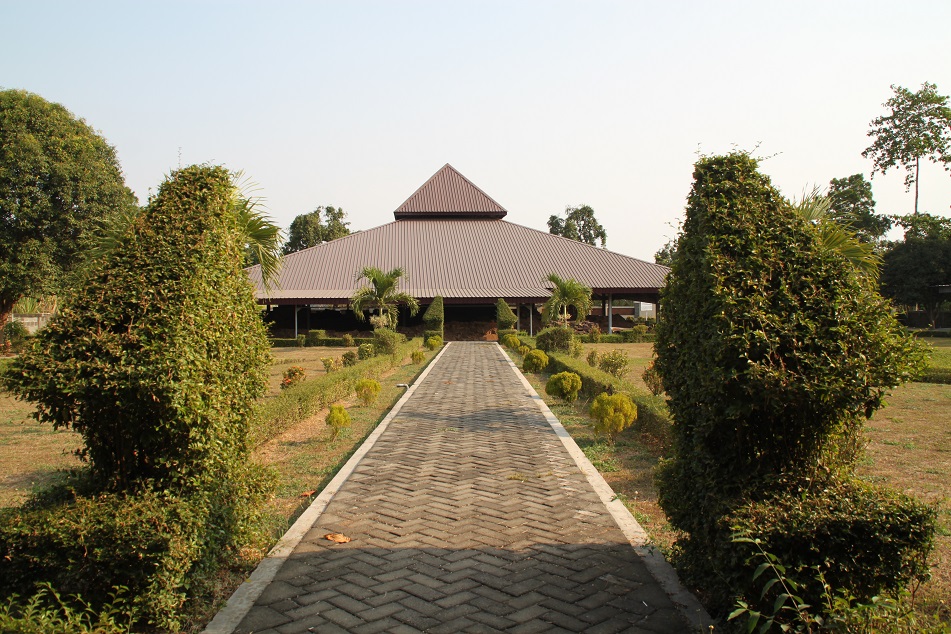 A Javanese-style roof protecting the fragile ruins underneath 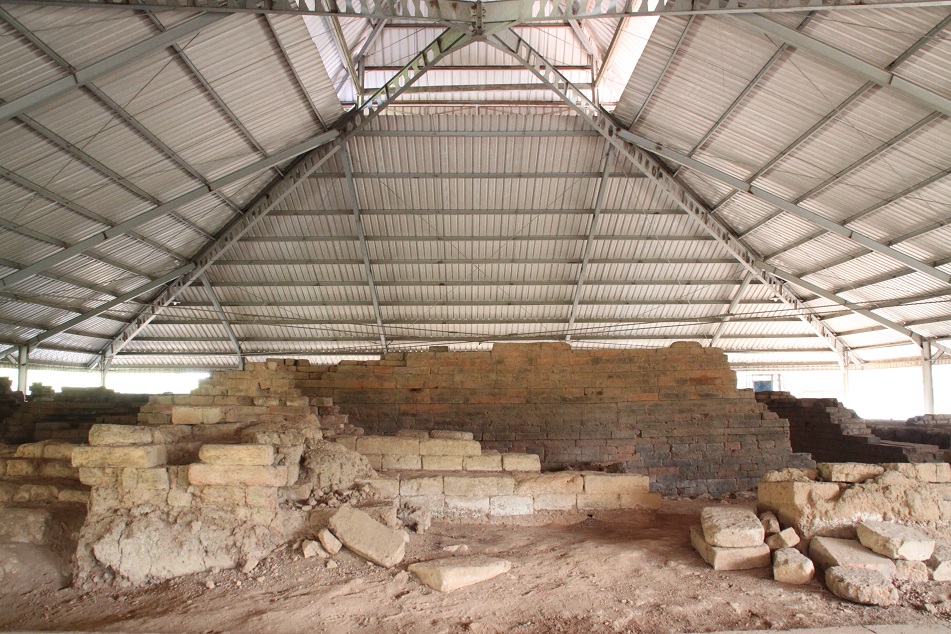 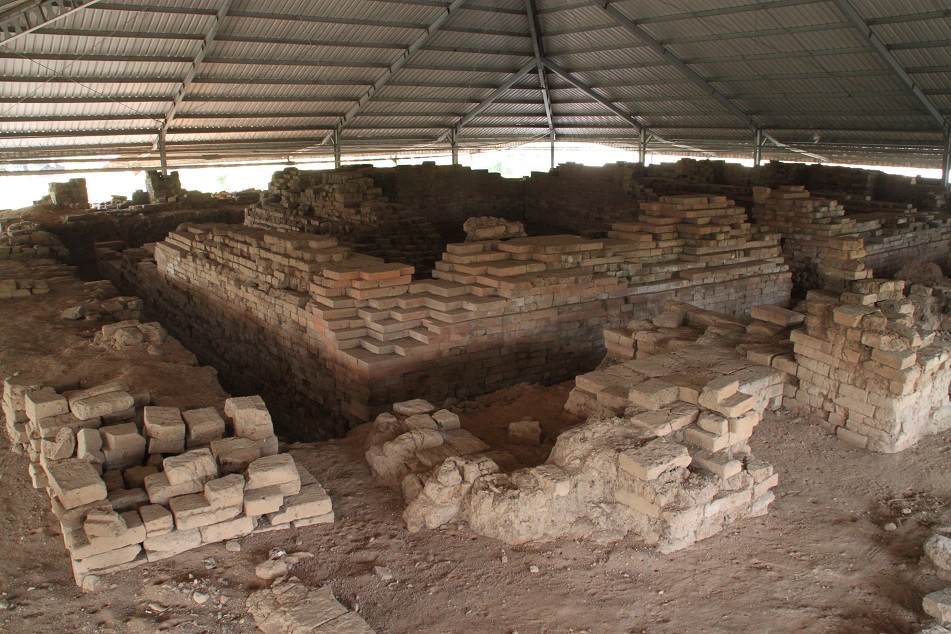 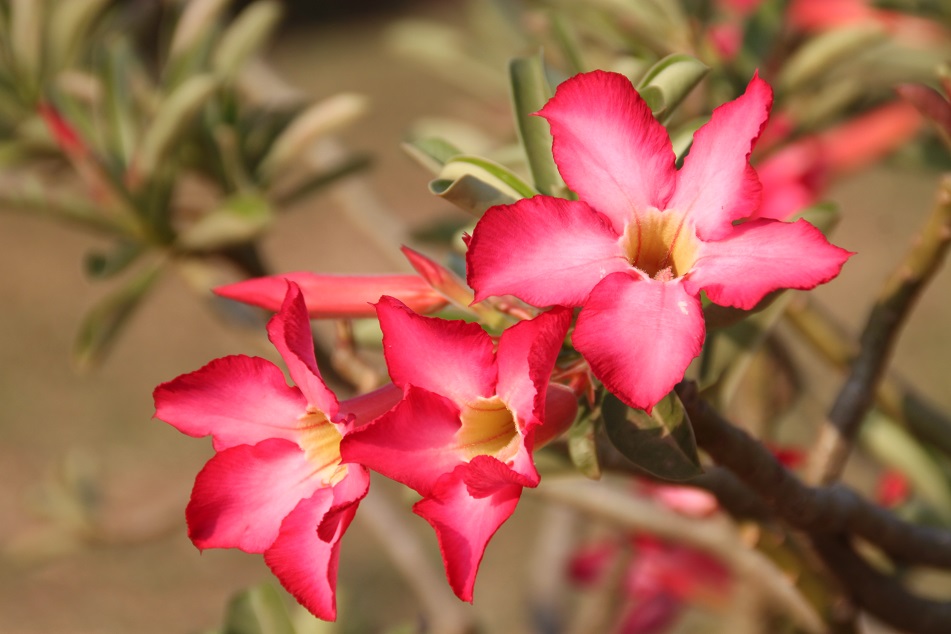 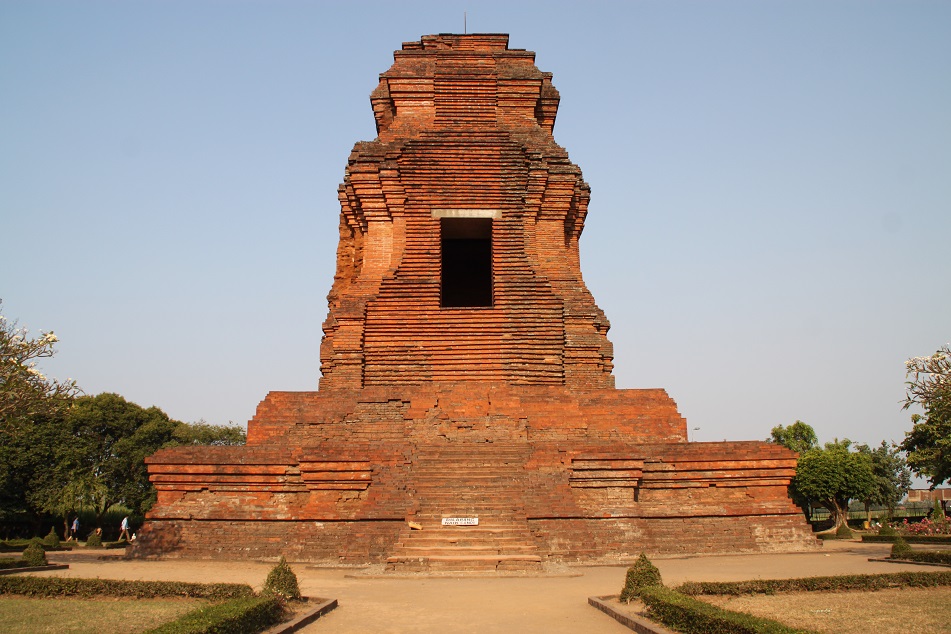 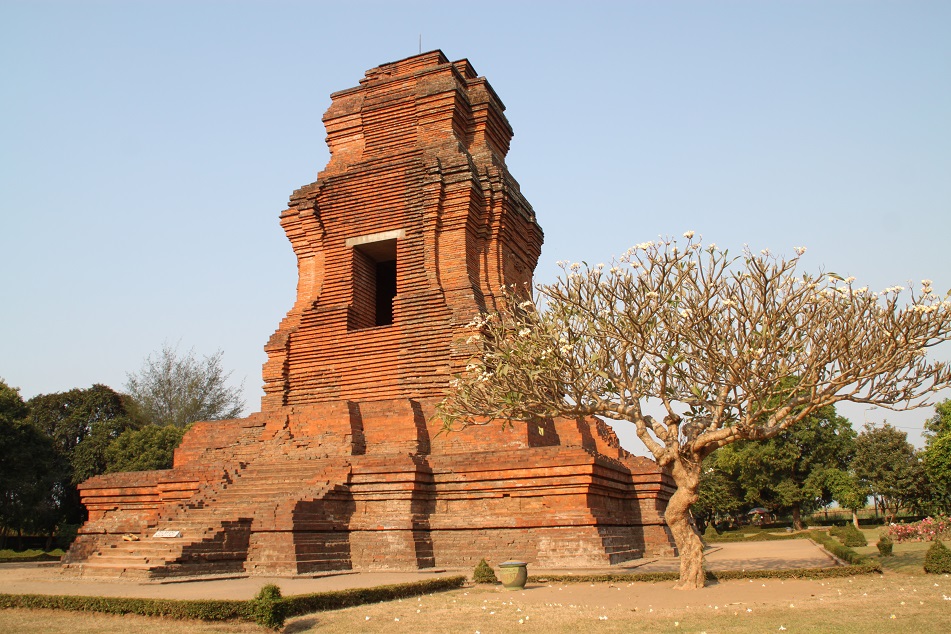 Curves from the past 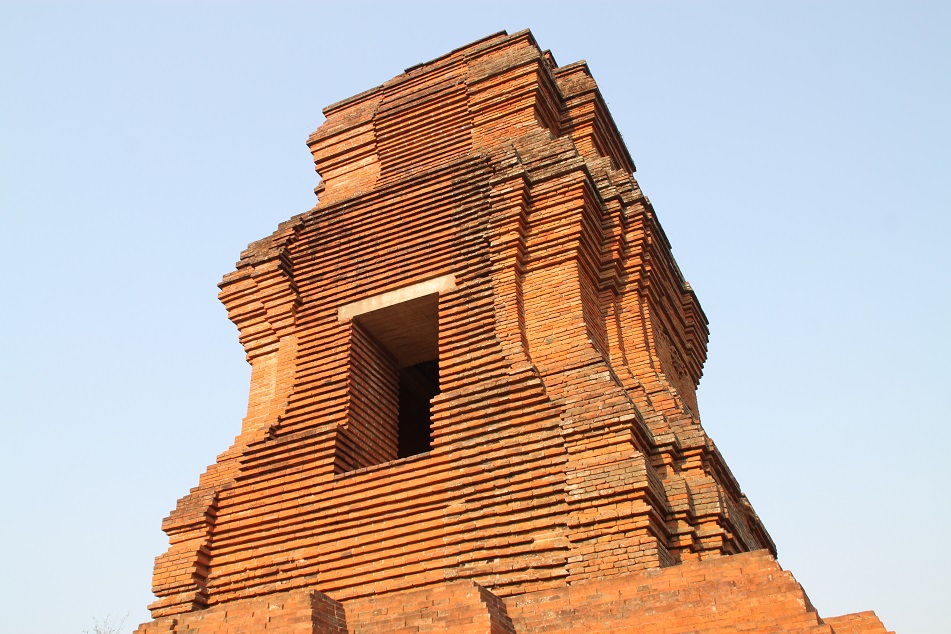 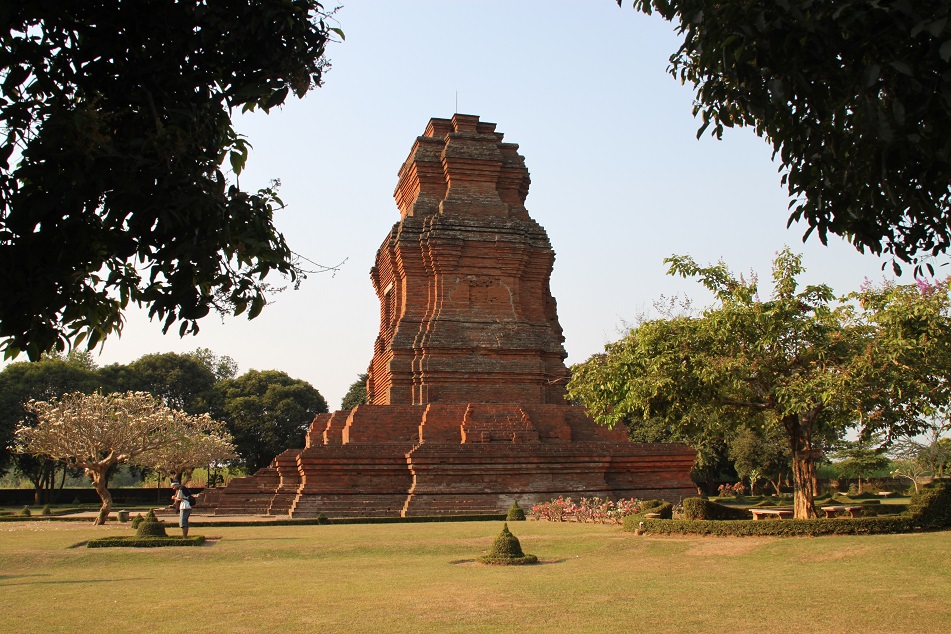