A Woman Seeking for Replenishment at Pura Tirta Empul

Gray clouds hanging on the sky that afternoon. A few minutes later the first rain drops started falling. My trip to Pura Tirta Empul (Pura is a Balinese Hindu temple) that day was in the very same mood and theme with the temple itself: water everywhere. Pura Tirta Empul is the prominent place for many Balinese Hindus to cleanse themselves, figuratively for a more spiritual reason, with the holy water that runs through the temple from a spring. A rectangular pool with several water spouts is always filled with people queueing to get their turn to wash with the water.

Queues of People at The Bathing Pool

The temple itself sits in a hill with a temperate weather throughout the year. If you look carefully, you will notice a more modern building located right above the temple. That is the Tampaksiring Palace, one of Indonesia’s presidential palaces. It was built during Sukarno’s (also pronounced Soekarno back then when Indonesia still used much of Ducth pronunciation) time of presidency (Indonesia’s first president and also one of the nation’s two founding fathers).

Not only local people who plunge into the bathing pool, but some foreign visitors were also spotted in the water during my recent trip. Some people looked very enjoying the bathe, some others seemed profoundly taking a short moment of prayer under the pouring water.

Apart from the bathing pool, a courtyard used for praying is also located inside the temple compound. When I was there, a religious ceremony/prayer led by a Hindu priest was being held. Canang Saris were everywhere, so were burned incense sticks. Every couple of minutes, a bell is rung while the praying devotees sit still in silence. The raindrops only made the atmosphere even more melancholic and serene. 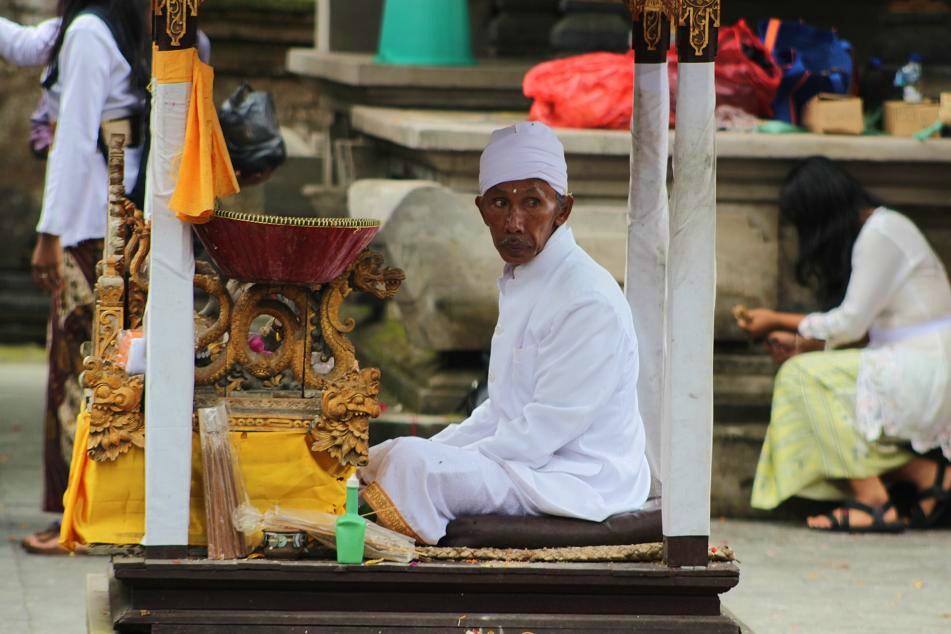 One of The Halls at Pura Tirta Empul Compound

I didn’t stay too long at this place as the rain only got heavier as I waited near a restaurant. Then I decided to continue my trip to other interesting places along the way to Kintamani region. By the way, as we are now already in the beginning of the year 2012, let us all replenish our spirits for a better year ahead, even though without the holy water of Pura Tirta Empul. Happy new year!